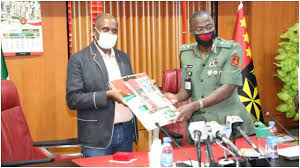 The Minister of Transportation, Rt Hon Chibuike Rotimi Amaechi has solicited for security synergy between the Nigerian Army, NA and the Ministry of Transport.

Amaechi made the request when he paid a courtesy call on the Chief of Army Staff, COAS, Maj. Gen. Faruk Yahaya at Army Headquarters, Abuja.

He said this synergy will enhance security at train stations and during the upcoming massive railway constructions in Nigeria.

While congratulating the COAS on his appointment, the Minister revealed that he was at Army headquarters to seek the support of the NA in providing security for the workers executing projects for the ministry in various parts of the country.

The Minister further revealed that some railway projects would be channeled through military establishments particularly the rail track linking Kaduna and Kano which is designed to pass through the Nigerian Defence Academy new site, stressing that the support of the NA to access such areas would greatly reduce the construction costs and enhance the development of the barracks environment.

Responding, the COAS, Maj. Gen. Faruk Yahaya said the visit was a welcome development, stressing that it provided an avenue for the NA and other agencies of government to deliberate on issues of national development.

He assured the minister of the required support adding that the NA stands with any programme or project that enhances national development and improves the welfare of the citizenry.

Highlights of the visit were group photographs, exchange of souvenirs and signing of visitors’ register.