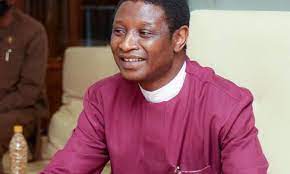 He disclosed this in his office in Abuja during a courtesy visit by the Christian Tourism Practitioners Association of Nigeria, CTPAN.

He stated that taking pilgrims out of the country without NCPC is illegal and against the Act that established the Commission.

According to him, “It is illegal for people to travel out of the country on pilgrimage without due respect to NCPC proceedings”, He added, “that such act will no longer be accepted by the Commission hence forth”.

Rev. Pam explained that so many Christian Pilgrimage Operators, CPO’s especially through the Lagos Airport have been taking people on pilgrimage without proper licensing and clearance from the Commission.

The Executive Secretary encouraged the Christian Tourism Practitioners Association of Nigeria to always stand for truth and to discourage abscondment among their pilgrims.

According to him, “The essence of pilgrimage will be defeated if they are more concerned about their personal gain”.

He intimated that the Commission would give the Christian Pilgrimage Operators one year renewal waiver of their license since pilgrimage exercise had been on hold for over one year due to COVID 19 pandemic.

Rev Pam further charged the Association to ensure that the composition of their executive members should reflect national interest and not just from one geo-political zone of the country.

Earlier, the President of the Christian Tourism Practitioners Association of Nigeria (CTPAN) Rev. Dr. Israel Kristilere thanked the Executive Secretary for receiving them despite his busy schedule.

He informed the NCPC boss that they were in NCPC to rub minds and seek his support on some of the issues the Association was passing through. In his words “we want NCPC to carry us along on issues as it concerns pilgrimage”.

He stated that  due to COVID 19 pandemic, pilgrimage exercise has not be done for over a year and that NCPC should grant their members one year renewal waiver of  their license.