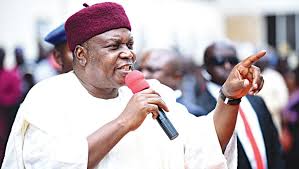 Governor Darius Dickson Ishaku of Taraba state has directed the state Agency for the Control of AIDS, TACA, to dedicate efforts in encouraging men to allow their pregnant women to attend antenatal clinics.

The Governor, who made this known at a workshop organized by the agency in Jalingo on the prevention of mother transmission of HIV in the midst of Covid-19, said the directive have become necessary “because that is where HIV testing can be provided and those found positive will be provided with necessary treatment to prevent transmission to their newborn babies.”

Ishaku who stated this through the Secretary to the State Government, SSG, Anthony Jellason, said the state government will continue to provide the needed support to ensure “pregnant women have quality antenatal care and safe delivery.”

This move, according to him is to “further reduce morbidity and death rates from pregnancy and delivery complications.”

He observed that the strong partnership embarked on by the agency with local governments and line ministries have yielded positive results especially in the reduction of the HIV prevalence from 10.5% in 2012 to 2.9% in 2018,

He urged the agency to continue providing, “This leadership roles especially in the area of prevention of mother to child transmission of HIV.

Reiterating, the Governor said his determinations will to continue to extend the much needed helping hands to the agency, pregnant women that attend antenatal clinics, as directed by him “should be encouraged to deliver in health facilities by skilled birth attendants.”

Earlier, Director General of the agency, Dr. Garba Danjuma, who said the workshop was designed to strengthen collaboration for planning, coordinating and implementing of HIV/AIDS activities effectively by leveraging on local driven and home grown approaches to HIV/AIDS response, urged government at the local levels to give the much desired helping hands to the Local Government Agency for the Control of AIDS, LACA.

Despite the drastic reduction in the prevalence rate, the agency as stated by him, is living no stone unturned to further reduce the scourge to the lowest minimum.