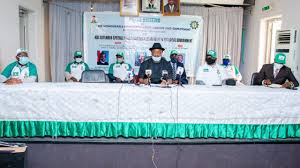 Committee Chairman Sylvester Obinna handed over the forms to representatives of various sectors yesterday in Owerri.

News Agency of Nigeria, NAN reports that the distribution was witnessed by religious leaders, traditional rulers and management of the National Directorate for Employment (NDE), among others.

Obinna lauded the President Muhammadu Buhari- led government for the initiative, and urged the heads of sectors to eschew nepotism and ensure the actualisation of the government’s target of job creation for Nigerians.

Obinna urged members to ensure that 200 of the 1,000 slots for each council were reserved for graduates.

He said: “The forms have been customised and embossed with some security features. Every council area has its own special forms meant for residents, irrespective of which part of the country they come from.

“The government will not tolerate gender, ethnic or religious bias; you must exercise caution in the execution of this assignment as you are under watch. Also, there should be 20 per cent graduate recruitment in all council.”

Obinna said the forms were free, warning that any committee member who sold the forms would be prosecuted.

The party alleged that the governor had decided to share the slot among his loyalists.

A statement by Publicity Secretary Ogubundu Nwadike reads: “The jobs were allocated to Imo people and not to those in the corridors of power, their families and stooges.

“Imo PDP rejects plans by this regime to corner the 27,000 job slots for itself and few supporters.”

But Uzodimma’s media aide, Modestus Nwamkpa, said the governor had no time for petty politics.

He urged PDP to play opposition politics that could positively impact the state, adding that the allegations were false.

“The governor has no time to play petty politics … He is focused on lifting the people from poverty. So, at the appropriate time, the state would be informed of the modalities for participating in the exercise.”