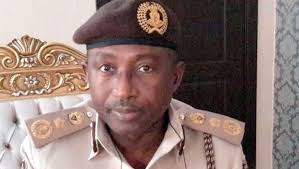 Nigeria Immigration Service, NIS has denied conflicting video and reports trending on media over bribery allegations by its officials.

The Service Public Relation Officer of NIS, Mr. Sunday James, revealed this in a statement made available to our correspondent on Wednesday in Abuja.

According to the statement, “The attention of the Comptroller General, NIS, Mr. Muhammad Babandede, has been drawn to a reposted video of a lady “Kibacho” from Switzerland, where she alleged an attempt by Immigration officers to extort money from her at the Airport in Lagos.”

“This video was first posted on Sept. 1, 2017 on Youtube it was titled “Swiss Lady vs Nigeria Immigration and the situation was promptly investigated and was found to be a false alarm.

“The Comptroller General is hereby for the umpteenth time, calling on well-meaning Nigerians to disregard the reposted video and always report genuine cases if any.