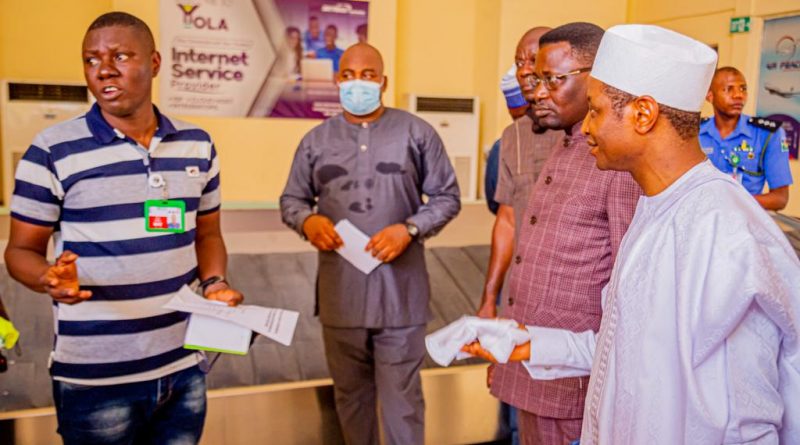 The Executive Secretary, Nigerian Christian Pilgrim Commission, NCPC, Rev. Yakubu Pam, has inspected the facilities at the Yola International Airport in preparation for the forthcoming 2021 Main Pilgrimage Exercise to  Israel, Jordan and Rome.

This event took place on  5th May, 2022 in Yola, Adamawa state capital.

The Executive Secretary while meeting with the Airport officials during the inspection on Thursday, 5th May, 2022 in Yola, Adamawa state capital, said he was in the airport to ascertain the level of preparedness of the Airport officials and to ensure the facilities are in good shape for the Commissions in the forthcoming pilgrimage exercise.

Rev. Pam revealed that the Adamawa pilgrims would be the first to be airlifted from Nigeria to Rome, saying that he was in the city to ensure all was set at Yola International Airport.

He said that one of the reasons for the meeting was to know the rules and restrictions so as to guide the pilgrims and well facilitate the forthcoming operations.

Rev. Pam further informed the Airport Manager that the Commission would need the assistance of the airport officials in order to know the protocols that would guide the Commission’s operations at the airport this year.

He also requested for the special assistance of the airport management to allow the Commission’s staff into the airport to guide the pilgrims for a smooth and hitch free operation.

Briefing the officials of his visit to the Government House, the Apostle of Peace  commended the efforts the  Governor of Adamawa State had  put in place to ensure peace and safety of his people.

In his words, “We must appreciate Governor Fintiri, who is the Chief shepherd of the State, without good leadership there would have been no peace within the State.”

He further praised the Elites of the State, to which he said, “where the Elites are having political crisis, the Enemy of Peace steal the opportunity to bombard the State with crisis. In Adamawa state despite religious, political and ethnic differences peace has been maintained”.

The NCPC helmsman further averred that it is the blessings of Peace that has attracted NCPC to Yola to carry out its Pilgrimage activities.

Speaking at the event, the Executive Secretary of the Adamawa State Christian Pilgrims Welfare Board, Rev. Zidon Love described the occassion as a noble gathering.

He expressed joy and appreciation to the NCPC Scribe for coming to inspect the airport facilities to ensure that all is in place for the airlift of pilgrims from Adamawa State.

Earlier, the airport manager, Mallam Dan Musa, who was represented  by the Airport Chief of Security, ACOS Mr. Dali Danawi Jackson disclosed that there were a few challenges at the airport, stating that he was delighted that the State government had promised to address them.

He assured that the Airport officials would do its best to ensure that the challenges confronting the airport were addressed to enable intending pilgrims to be airlifted from the airport.

Mr. Jackson further gave the assurance that the airport officials are ready, adding that the airport perimeters were well secured and security will be beefed up to ensure every pilgrim’s safety.