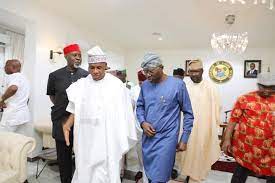 Frontline Presidential Aspirant, Rt Hon. Chibuike Rotimi Amaechi says his decision to run for the Presidency of Nigeria is borne out of the need to serve and provide selfless leadership to Nigerians

Amaechi said considering his wealth of experience, he would be a President that would protect the interest of all Nigerians irrespective of tribe or religion.

Amaechi spoke when he paid a consultative visit to the leadership of All Progressives Congress, APC in Lagos State, Thursday.

According to him, “I come with a national interest. I am 56 years old, I am energetic, I am strong and if you work with me you will know that it’s a bit difficult to get me tired. So, because I come with that energy, it separates me from the rest of the candidates who are running with me. I have come to talk to your conscience because it is about Nigeria. It’s not about my father, it’s not about my brother, It’s about the nation.

“We are at the point where our decisions will make the difference in moving the country forward. We are at the point where we can appeal to our conscience that our votes should count in making sure that we would not regret after the election. So, put your votes for me. What separates me from the rest of the candidates in the party is that I am young and if you look at all of us, I come with experience.”

“I was a Speaker for eight years. So, I come with experience. I have served as Governor in a State where people were being kidnapped, people were being killed, robbery was on the increase, people couldn’t go out in Port Harcourt, parties weren’t going on, health sector was bad. But, in six months I chased away the criminals, got people to go back to work and restored sanity in the State. So, I am the only aspirant that does not only come with experience but has served in a State where there was insecurity.

“I have also served at the national level. I have served seven years as Minister for Transport. And If you were in Lagos when we were constructing the Lagos-Ibadan railway, you will know that I am not a big-man-minister, because I was coming to Lagos every month and I will sleep here, I will trek for 17 kilometers, screaming at contractors because we gave them timeline and we delivered the Lagos-Ibadan railway. So, I actually come with experience. I am applying to be employed as your President. I am not one asking for solutions, If you employ me I will come with those solutions. So, if you honestly want to look at somebody who is detribalized and you keep away sentiments, you would vote for me.

Amaechi who also listed some of his achievements as a Minister, explained that it takes one with a national posture and outlook to cite the numerous projects recorded in Lagos outside the South-South where he hails from.

“Check what the Ministry of Transportation is doing. In the whole of the country there’s never been a seaport in Nigeria.  The first government to build a seaport is the Buhari government. Don’t forget, I could have moved it to Port Harcourt because I’m the minister for transport. I could have easily moved the Lagos-Ibadan railway to Port Harcourt, but I realized that what determines a man is not tribal or sectional interest; it’s the economic interest of the country. I know that the Lagos-Kano railway should be the most viable railway in Nigeria but I could have been political and choose Port Harcourt -Maiduguri railway, but I put national interest first, because it would create employment, reduce the crisis we have in Nigeria and I sited the Lagos-Ibadan railway.

“Today, we have created a lot of employment, logistics for those who are going to Abeokuta. People now live in Abeokuta and come to work in Lagos, and we need to put more coaches and locomotive because we hear the demand is high. The water you have in Lagos is the same water that goes to Bonny. I could have moved the Lekki Deep Seaport to Port Harcourt. And you know, by September, President Buhari will commission the Lekki Deep Seaport and it will create employment in Lagos. That’s the difference I come with. I come with a nationalist scale that makes me take the right decisions for the benefit of the country. So, judge me by what I have done, judge me by capacity, don’t judge me by where I come from. In this respect, I don’t come from Ikwerre, I come from Nigeria, that’s the difference between me and other aspirants. I love Nigeria,” Amaechi said.

He added that, if given the opportunity, he would tackle Insecurity, unite Nigerians and improve on the overall welfare of the masses.

In his response, State Chairman of the APC, Hon. Cornelius Ojelabi noted that there was need to collectively protect the sanctity of the party. He also commended Amaechi for his courage and sagacity during the party’s formation stage.

“We want to thank you for coming to tell us your aspirations, to solicit for our support, we appreciate you. In Lagos State we have a way of doing our things and that is why we have been able to sustain and maintain Lagos State for APC since 1999 till date.

“Honourable Minister,  I just want to appeal to you, this is your party, I want you to remember how you started this mission at the formation of APC. You had that courage that this thing is doable and you did it, you put everything at your disposal into it, you put your resources, intergrity and you put your life. We need to come together, that is the direction we want to go.”

“Today, APC is at a crossroad, we want to transit from one President  to another. Those of you that are foundation member of the party,  you are one of them, along with some other leaders. Those of you that laboured, that faced that monster of PDP, I want you to assemble yourselves again and critically assess the situation we have found ourselves today.

“My appeal is, let us manage this period critically. I am going to convey your visit to the leadership of our party, but I can assure you, this is your party, this is my party and APC is our party and collectively, we will continue to defend the sanctity of APC,” Ojelabi said.

At the Governor’s Office in Marina, Governor Sanwo-Olu welcomed the Minister of Transportation, stating that in spite of his respect and high regard for the National Leader of the APC, Asiwaji Bola Tinubu, it is evident that Amaechi is also eminently qualified for the presidency.

He said, “As a person, i have shear regard and respect for our leader Asiwaju Bola Tinubu, I have been a direct beneficiary of his leadership, I have been part of his cabinet, and personally I continue to toe that line of leadership Asiwaju stands for. But because we are not God, God himself will help the cause of this country.

“I want to say to you that you are eminently qualified and there is no doubt about that. You are very experienced in this journey, but for a whole lot of us in Lagos state Asiwaju continues to be our rallying point. I certainly know what your pedigree are and what you have done. I will be unfair if I don’t say that. I wish you all the very best,” Sanwo-Olu said.

On his part, the Oba of Lagos, Oba Akiolu said, “ I tell everybody, the future belongs to God. If it is efficiency, knowledge, activity, you are qualified. I pray to God Almighty to give you good health and long life. I tell people that the question of security of this country is not for Buhari alone, it is the responsibility of all of us. God will give us the best man who will address all our problems.

“You are very agile and honest to a fault. Remember, politicians don’t quarrel, they only disagree to agree later. God Almighty will guide you and bless you,” Oba Akiolu said.