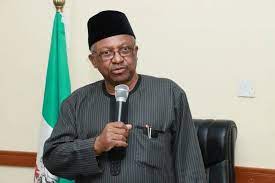 Minister of Health, Dr. Osagie Ehanire has lamented that the country was battling with 15 neglected tropical diseases out of the 20 identified by the World Health Organisation, WHO.

Dr. Ehanire, while making this disclosure on Tuesday in Port Harcourt, noted that over 122 million Nigerians are at risk of Neglected Tropical Diseases, NTDs.

The Minister, addressing journalists at a Two-Day Media Dialogue on Neglected Tropical Disease Control in Nigeria”, holding in Port Harcourt, Rivers State, organized by the United Nations Children’s Fund, UNICEF, in collaboration with the Child Rights Information, Bureau of the Federal Ministry of Information, regretted that the diseases are so devastating that they leave their victims miserable.

Represented by the National Coordinator of NTDs, Dr. Nseobong Akpan, he lamented that when household diseases such as malaria, HIV and AIDs are mentioned, NTDs will not be there despite the fact they are common among the downtrodden.

He said, “We have done enough about NTDs but they are still raging across communities in the country. There is a need to create awareness and for communities to be involved in efforts geared towards eliminating the diseases. We will be able to eliminate the diseases if everyone including the media join in crying out loud and support in efforts and commitment of stakeholders to achieve success in the elimination of NTDs.”

In his presentation as the National NTDs Coordinator entitled: “Overview of the Neglected Tropical Diseases”, Dr. Nseobong Akpan further decried the negative impact on the economy as economic development cannot occur without addressing these diseases.

Speaking on the 122 million Nigerians at risk, he said: “It is estimated that 122 million persons that are 2 out of every 3 Nigerians are at risk of one or more of the NTDs. “Of the number, 20 per cent are pre-school. Age children, 28 per cent of school-age children between age 5 to 14 years and 52 per cent are adults 15 years and above.

She said over 700 million people are living at risk of infection and over 90 per cent of people live in Sub-Saharan Africa.

Nebe said it is a disease of low socio-economic status affecting the poorest communities and most neglected vulnerable people.

“Infants, children are especially prone to infection due to their less developed immune system as worm infestation are passed through contaminated food, water or soil.”

Ogunjobi explained that the Nigerian NTDs programmes were mainly sponsored by partners, calling on the government to get more involved in the elimination process of these diseases.