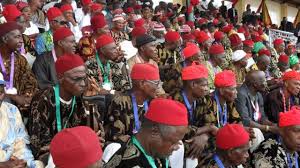 Irabor once served as the theatre Commander, Operation Lafiya Dole and headed the MultiNational Joint Task Force, MNJTF as the Field Commander.

The Ohanaeze Ndigbo faction described the removal of former service chiefs as an answer to the prayers of Nigerians.

“It’s a new dawn, for Nigeria towards defeating Boko Haram insurgents and bandits ravaging the north,” the group said in a statement signed by its President-General, Engr. Chidi Ibeh.

“Buhari has demonstrated courage and political will by the removal of former service chiefs who had ran out of ideas.

“These new service chiefs should be given a clear mandate to crush Boko Haram insurgents and bandits, while maintaining strict professionalism in discharging their new mandates.

“This is an opportunity to serve the nation and I believe that the Service Chiefs will be focused and dedicated, ” he said.