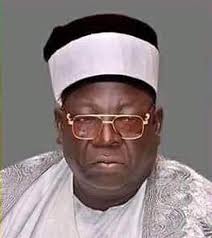 The Executive Secretary of the Nigeria Christian Pilgrim Commission, NCPC, Rev Yakubu Pam has expressed his heartfelt sympathy to the Government and people of Gombe state over the death of HRM, Mai Tangale of Biliri, Gombe state, Dr. Abdul Buba Maisharu, who passed un to glory on 10th January, 2021 at the age of 72 years

In his condolence letter to the Government and people of the state, Rev Pam affirmed that Gombe state and Nigeria had lost a rare gem and a detribalized Nigerian.

He noted that the late Mai Tangale would be greatly remembered for his peaceful disposition; and for being an apostle of inter faith harmony.

The NCPC boss further noted that the late Ist Class Traditional Ruler died when his services and wealth of experience were most needed.

He averred that as the former Chairman of the Gombe State Christian Pilgrims Welfare Board, HRM late Mai Tangale piloted the affairs of the Board with deep sense of service and humanity.

He prayed that the Lord would grant his soul eternal rest and grant his family and the Government of Gombe state the fortitude to bear the irreplaceable loss.