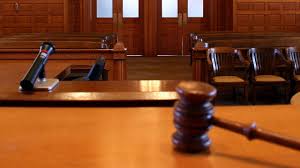 The Police has arraigned Oluwasuyi Olakunle, 28, for allegedly recording customers in a banking hall in Ado-Ekiti.

The defendant was taken to an Ekiti Magistrates’ Court on Wednesday.

Oriyomi Akinwale, the prosecutor, said Olakunle committed the act on December 29, 2020, about 3.00 pm at a bank in Ado-Ekiti.

The police inspector noted that the action could have caused the breach of peace.

The offence contravened Section 249(d) of the Criminal Code, Laws of Ekiti State, 2012.

Akinwale pleaded for an adjournment to enable him study the case file and assemble his witnesses.

When the charge was read to him, Olakunle pleaded not guilty.

Olarewaju Oluwasola, his lawyer, requested for bail as he promised that his client would not elope.

The Chief Magistrate, Lanre Owoleso, granted N100,000 bail to the defendant with two sureties in like sum.

One of the sureties he said must produce evidence of tax payment to the state government.

Owoleso adjourned the case until January 19.