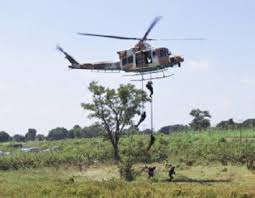 Air interdiction missions being conducted by the Air Task Force of Operation LAFIYA DOLE have continued to deal decisive blows on terrorist elements operating in the North East Zone of the Country with the elimination of Boko Haram Terrorists, BHTs and destruction of their structures and logistics store.

In a statement sent to Journalists, the latest of these was achieved on 1 January 2021, at MANA WAJI in Borno state, where the BHTs set up a new settlement.

“The air strikes, which were executed employing a force package of Nigerian Air Force, NAF fighter jets and helicopter gunships, were carried out after series of aerial surveillance missions revealed that the new settlement was being used to store their weapons and logistics items and as well as plan and stage attacks.

“On sighting the NAF aircraft, the insurgents were seen fleeing the location. Consequently, in a preemptive move, the NAF attack aircraft engaged the new location in successive passes, leading to the destruction of some of the structures and logistics stores. Several insurgents were also neutralized in the process.

“You are please requested to disseminate this information, along with the attached declassified short video clip of the attack, through your medium for the awareness of the general public.” it said.