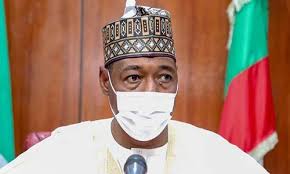 The Borno State Governor, Babagana Zulum, has condemned the recent abduction of 30 travellers in the state and blamed the military for not doing enough to protect people in the state.

The governor flayed the army and the rapid response squad in the state comprising policemen, vigilantes and hunters for their failure to secure the Maiduguri-Damaturu Road, which has become a major axis for attacks and kidnappings.

The Governor, during a visit to Jakana, one of the major towns along Maiduguri-Damaturu highway, on Monday, said it was disappointing that the majority of the attacks within the last two years, took place between Auno and Jakana, a distance of about 20 kilometres.

He noted these in a statement titled ‘Friday abductions: Zulum visits Jakana, furious over routine attacks on Maiduguri-Damaturu highway …Baffled with army’s failure to secure 20 kilometres’.