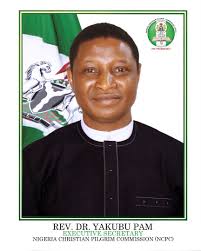 The Nigeria Christian Pilgrim Commission, NCPC on Sunday held a one day consultative meeting of steering and facilitation committee for the proposed National Prayer and Peace Summit with Christian stakeholders in Lagos.

Speaking at the meeting, the Executive Secretary of NCPC, Rev Yakubu Pam urged the fathers of the Church to rise up to the occasion, adding that the country required them to provide credible leadership at a time like this.

According to the NCPC boss, “A lot of people asked us for guidance” He explained that after the EndSARS protest, so many urgly things were brought to the fore”

He stressed that Lagos was heavily affected by the EndSARS protest, hence the need to forestall any reoccurrence of that urgly experience.

The NCPC boss described Lagos as the pride of the nation and the nerve Centre of the nation,s economic base with massive investments.

He reiterated that the church leaders in Lagos gathered together to find a lasting solution to the restiveness of our youth and the general state of our nation. His words, “we are here that together we will find the solution we are looking for”

He averred that the hope of this country lies with the Christian and Moslem leaders.

Rev. Pam further explained that as an advocate of peace, he would ensure that peace is achieved in the country, stressing that they have a duty to save Nigeria.

He promised to hand over the findings of the peace committee to the Lagos State Governor, Babajide Sanwo-Olu and President Muhammadu Buhari at the end of their resolutions.

Rev.Pam who is the Chief Convener of the meeting, affirmed that it is only through dialogue that this country could be united, saying that it is good to allow people to speak freely.

Earlier, Chief Kenny Martins, a key facilitator of the meeting stated that the forum would serve as the beginning of a peace revolution in Nigeria and would help to break the obstacles that had bedeviled the country for a long time.

He thanked the NCPC boss for his ceaseless and untiring efforts to bring peace in Nigeria.

Chief Martins further stated that the politicians had failed the country as well as the corporate world.

He explained that the time had come to put an end to bloodbath in the country and to find a lasting solution to the problem of the young people.

The consultative pease meeting of Christian leaders would be held on zonal basis beginning with Enugu, South East by first quarter next year.