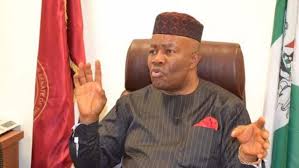 The Minister of Niger Delta Affairs, Senator Godswill Akpabio, has revealed that the Federal Government is targeting the completion and delivery of the entire stretch of the East-West road, from Sections 1 to 5 on or before December 6, 2021.

Senator Akpabio, expressed his ministry’s commitment to deliver Section I-IV of the road in line with the present administration’s aspiration.

The Minister explained that efforts are on the top gear to see to the award of Section V (Oron-Calabar) after necessary technical reviews.

He made the disclosure during a roundtable meeting of counterparts on the complementary programme for the road project held recently in Abuja.

A statement released by the ministry’s Director, Press and Public Relations, Patricia Deworitshe, qouted Akpabio as saying that the target of the ministry is to deliver completely Sections I-IV of the East-West road on or before December 6.

Then ensure the revalidation and award of contract for Section V covering Oron-Calabar initially awarded to RCC Construction Company by the Federal Executive Council (FEC), but was later abandoned due to the astronomical cost of the project when it was re-routed.

Akpabio, who appreciated the commitment of members of the counterparts’ team, noted that these deliverables would not be complete without a virile management support for the road.

“It is not just the road that is important but also the management of the corridor such that it will enable the development of aesthetics and other infrastructures along the road network,” he said.

Akpabio added that the commitment of the ministry to the roundtable meeting must therefore be complemented by the support of all the counterparts in terms of action to ensure the beauty and sustainability of government efforts and development agencies on the road over the years.

The high point of the occasion was the presentation of advisory notes to representatives of counterparts at the meeting.

Speaking during the meeting, the Permanent Secretary in the ministry, Dr. Babayo Ardo, said the road traversing five states in the region has been under construction since 2006, adding that the administration of President Muhammadu Buhari has promised to ensure its completion by 2021.

Babayo said in order to realise this promise, the ministry was not only pooling resources together to ensure its completion, but also that the completion and management of the road will top the main item on the agenda at the 4th National Council of Niger Delta slated for between December 14 and 19, 2020 in Port Harcourt.

According to him, the meeting is a complementary programme on the road that would be reported at the National Council, as development consists of both the ‘hardware and software’ components, to ensure adequate management of the road usage.