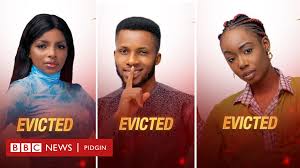 Eleven housemates were up for eviction. They were Tolanibaj, Trikytee, Kiddwaya, Lucy, Erica, Prince, Neo, Wathoni, Dorathy, Vee and Laycon.

Tolanibaj, Brighto and Wathoni were among the bottom six, but Tolanibaj was the first to be booted out against her expectations. She polled just 2.75%

But she hoped her fans were satisfied with her journey so far, she said, “I know for a fact that I will be missed at Saturday night parties,” she said.

Next to be evicted was the couple Brighto and Wathoni.

Wathoni, who said Brighto made her happy, is a 29-year-old fashion entrepreneur.

She is a multi-talented single mother who juggles a fashion business and a parenting blog.

She is also bilingual and speaks and writes in Swahili fluently.

Unknown to her, Brighto was the third evictee of the night as he polled the worst score, just 2.68%.

Brighto was surprised that he was evicted but thought the ‘Brightoni ship’ might have contributed.

He said he got used to Wathoni though he did not plan for a relationship.

He added that it was not intentional to knock heads together, adding that he would stick to his career as a Marine engineer.

Brighto, as he is fondly called, is the youngest of six kids. He holds a degree in Marine Engineering from Arab Academy for Science Technology and Maritime Transport in Alexandria, Egypt with several other professional certifications.