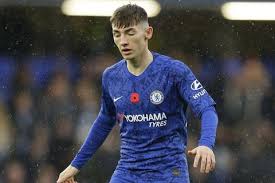 19-year-old Chelsea’s midfielder, Billy Gilmour has been named the club’s academy player of the season.

The young ace midfielder was named as an honour towards recognizing his achievement while playing for Chelsea’s Academy teams, and his partial integration into the men’s first team.

Gilmour joined Chelsea in 2017 from Glasgow Rangers and progressed through the Chelsea youth development ranks quickly.

He also won the Premier League 2 player of the month for August 2019. After signing a new contract with Chelsea, the season was cut short for him by a knee injury that required surgery in July.

Gilmour was given 11 top-flight outings by Lampard the last term. Among them were two man-of-the-match performances in wins against Liverpool and Everton.

Billy Gilmour’s announcement as the Academy player of the season follows Chelsea’s unveiling of the club’s goal of the season won by Fikayo Tomori for his volley against wolves.

Chelsea’s player of the year for both men and women category would be announced later on Tuesday. Previous Chelsea academy players of the year are Dominic Solanke, Fikayo Tomori, Mason Mount and Reece James.