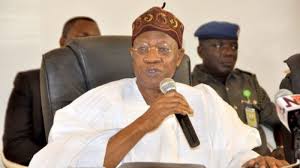 Minister of Information and Culture, Alhaji Lai Mohammed, has received the report of the Audience Measurement Task Team, with a pledge to implement it in order to reverse the declining fortunes of Broadcast Advertising in Nigeria.

“Based on the feedback that I have received and the eloquent speech just read out by your Chairman, I am convinced that the report that you are submitting today will go a long way in helping us to achieve our objective, which is to solve the Audience Measurement issue in Nigeria, once and for all,” the Minister said on Thursday while receiving the report virtually in his office in Abuja.

He said the absence of a world-class Audience Measurement System has resulted in under-investment in the Broadcast Advertising sector and stunted its growth, unlike the Nigerian film, music and fashion industries which have grown significantly over the past decade.

“As I have said on many occasions, the value of Nigeria’s Broadcast Advertising Market is not proportional to the country’s population, when compared to the Top 3 Markets in Sub-Saharan Africa. Despite having a population more than three times that of South Africa, Nigeria’s Television Advertising Revenue in 2016 was US$309 million, compared to that of South Africa, which was US$1.3 billion,” Alhaji Mohammed said.

He said with the submission of the report, the immediate task before the government is to bring the under-performing the Nigerian Broadcast Advertising Market to what it should be, which is two to three times its current size.

The Minister said this could result in additional US$400 million of revenue in the industry within the next three years, adding: “The key to achieving that objective is the faithful implementation of the report you are submitting today.”

”Let me assure you that we will study the report and implement the recommendations, especially the 5-Step Agenda, with the same vigour and commitment that you have employed in putting it together,” he said.

In his remarks during the virtual submission of the report, Alhaji Bello-Kankarofi, who is a former Registrar of the Advertising Practitioners Council of Nigeria, said the current Audience Measurement System (AMS) is two decades old, which still uses the old diary method (pen & paper) of collecting data on TV viewership and Radio listenership across key locations in Nigeria.

Alhaji Bello-Kankarofi observed that the current practice is challenged by the growing number of TV and Radio stations, which the Digital Switch Over mandate will further exacerbate hence the need to replace it with a scientific-based Audience Measurement System.

The event was attended by the Permanent Secretary, Federal Ministry of Information and Culture, Deaconess Grace Isu-Gekpe, and the Acting Registrar of the Advertising Practitioners Council of Nigeria, Mrs. Ijedi Iyoha.