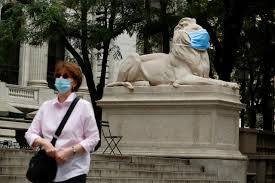 More than 53,000 new cases of coronavirus has been reported on Friday by the United States.
The daily US tally stood at 54,904 late Friday, below the previous day’s record of between 55,405 and 57,232.
Number of states also set new records. Alabama, Alaska, Idaho, Mississippi, North Carolina, South Carolina, and Tennessee all set single-day records for new cases on Friday, according to a Reuters tally.
The surge in coronavirus cases has put President Donald Trump’s handling of the crisis under the microscope and jeopardised reopening the economy, with some states closing high-risk businesses.
In Florida, the surge has created palpable fears over shortage of intensive care beds.
Now, the state’s most populous county, Miami-Dade has locked down again, imposing a curfew and closing beaches over the Fourth of July weekend to contain the spread.
Miami-Dade County Mayor Carlos Gimenez said the 10 p.m. to 6 a.m. curfew began Friday night and will be in place indefinitely.
A new county order also closes casinos, strip clubs, movie theatres, the zoo, and other entertainment venues a month after they were allowed to reopen.