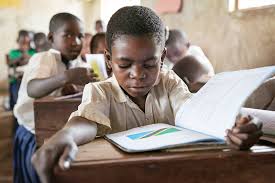 President of Shiloh Global, Dr. Prince Emmanuel Ezewuiro, made this disclosure during the weekend while speaking to journalists in the school premises.

Ezewuiro explained that he has seen the deteriorating situation of education in Nigeria, adding that what he saw among the children is very pathetic.

He said that the foundation decided to come to the aid of the children/students as part of the organisation’s corporate social responsibility considering the fact that these children are not making progress in their academic pursuit.

President of Shiloh Global explained that Shiloh Global Development Empowerment Foundation do grant scholarship to students so as to encourage them achieve greatness they deserve, even though they do not have financial support .

According to him, “Shiloh Global Development Empowerment Foundation, through this development empowerment program grants scholarship to children as a way of assisting those who are willing to achieving global super greatness in them, but are fimamcially handicapped”

Morakinyo disclosed that students of the school have been very successful in WAEC and NECO examination since the school got her accreditation over 4 years ago, stating that students have been coming out with brilliant results every year.

In a remark, Nasarawa state Commissioner of Police, Mr. Emmanuel Bola Alonge, who was represented by CSP Abapmi Kolawole Philip, said that cultism has taken over the whole communities and school environments.

Alonge lamented that young boys in the name of cultism have resort to arm themselves at all time with short guns, knives and scissors, adding that university students have engage themselves in raping women, which he said pose danger to the society.

He however advised students at all levels to face their studies squarely, shun all forms of social vices and cultism so that they can be better people in the society.