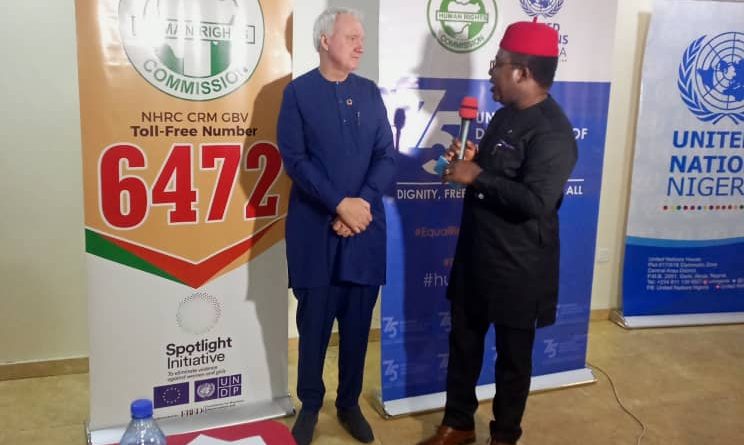 The National Human Rights Commission, NHRC in collaboration with the United Nations, UN Office in Nigeria, on Friday, launched a call center short code 6472 at the 75th anniversary campaign on Universal Declaration of Human Rights, UDHR and other activities to commemorate the day.

According to NHRC, the sort code will provide an easy access to the Commission for complaints on human rights violations.

Speaking at a press conference to commemorate the 2022 event, the executive secretary of the commission, Tony Ojukwu SAN said the effort is geared towards simplifying human rights complaints and bringing easy communication to the door steps of users since it comes at no cost.

Ojukwu applauded the media and also solicited for their commitment to getting the message of this year’s message of the UDHR to the people.

He noted that development can only occur when human rights issues are embedded in every aspect of governance process.

He reaffirmed the commitment of the UN in working with the NHRC and other partners to deliver on the promises made in 1948 to achieve Human Rights for all.

His words: “We can only rescue the Sustainable Development Goals#SDGs if human rights are at the centre of planning and implementation; and if we neglect human rights issues, we are all at risk”. He said and call on everyone to stand up for their rights and those of others.

The 2022 human rights day is a week-long activity that kicked off with the press conference and launch and will end next week Saturday with an Awards Night.

Additionally, the programme will also feature a town hall meeting with presidential candidates for 2023 elections.

Meanwhile, the highlights of the occasion was the unveiling of UDHR75 Logo by Chief Ojukwu and Mathias Schmale and the launch of NHRC client response mechanism short code number 6472.

Recall that in Nigeria, women and girls are vulnerable to physical, sexual or psychological abuse that cuts across lines of income, class, and culture. Empirical evidence shows that SGBV is a crime that has continued unabated at a very high rate in Nigeria as gender and women rights complaints constituted the most complaints, almost a quarter of the complaints to the National Human Rights Commission. Violence against women is expressed in many forms such as denial of economic and social rights, discrimination and exclusion from opportunities, and dehumanization. Specifically, SGBV include rape, sexual abuse, sexual exploitation, physical violence, forced/early marriage, domestic violence/neglect, harassment and security threats against women/girls amongst others.