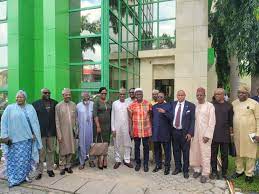 The Managing Director/CEO, Federal Roads Maintenance Agency, FERMA, Engr. Nuruddeen A. Rafindadi, FNSE, and the Executive Governor of Anambra State, Prof. Charles Chukwuma Soludo, CFR, during a courtesy visit to the FERMA headquarters recently agreed to form a productive and strategic partnership to maintain roads in Anambra State, which will help to ease the suffering of the State in their daily movement from one place to the other for their businesses.

The Managing Director in his speech said he was happy with the coming of the Executive Governor of Anambra State, Prof. Charles Soludo to FERMA, saying that the Governor’s proposal for a productive partnership was a great idea which the Agency is pleased to accept.

Rafindadi added that partnering with the Anambra State Road Maintenance Agency was a professional strategy by the Governor. He said the Agency will pull its expertise to work with the State Agency to fix roads across the State.

The Managing Director said ‘’FERMA is the first and only government Agency that has the widest scope and expertise on road maintenance in Nigeria, it has competent staff that can work wonders when challenged’’.

He said that Anambra State has 14 Federal roads of about 682 kilometres and that half of the Agency’s attention during EMBER months is usually focussed on South Eastern States especially Anambra because of its status of being the gateway to other parts of the country.

The MD said the Agency has justified its mandate of efficiently and effectively monitoring and administering roads maintenance with the objective of keeping all federal roads in good and safe conditions across the federation.

He mentioned a number of roads in Anambra that has been maintained and that the Agency will continue in its giant stride especially with the partnership of the Anambra State Roads Maintenance Agency.

Speaking earlier, Governor Soludo said the purpose of his visit to the Agency to commend Federal Roads Maintenance Agency for the good job they are doing in Nigeria and particularly in Anambra State.

The Governor appreciated FERMA for the efforts it is making in the South East especially in Anambra State, saying the Agency’s intervention in the maintenance of federal roads in the State has yielded good results which have eased the suffering of the people of the State.

Speaking further, Soludo said the other reason for his visit was to ask for productive and strategic partnership with the Agency to fix and maintain Federal roads in the State.

Explaining, he said, the government of the State would want to partner the Agency to the extent of providing funds when necessary even if it will require refund to enable roads be maintained as at when due.

He also said that FERMA should consider a possibility of working on roads that of priority to the government. This Soludo said will help in easing the suffering of the people, and also help the Agency to deliver timely.

The Executive Director, West Operations and FERMA Board Member, Engr. Mujaidu S. Dako, FNSE, in his comments reiterated the Agency‘s readiness to  partner with the government of Anambra State, saying that the Governor was a reliable person who has the interest of the people of Anambra State  in particular and Nigeria in general at heart.

He added that Governor Soludo will deliver the dividends of good governance to the people.