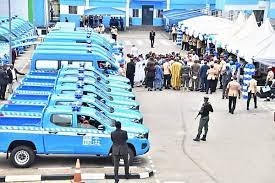 …to enhance activities of the corps

In order to enhance activities of the Corps across the country, a total of 316 operational vehicles approved by President Muhammadu Buhari for the Federal Road Safety Corps, FRSC were officially inaugurated on Thursday in Abuja by the Federal Government.

The Secretary to the government of the Federation, SGF Boss Mustapha, while inaugurating the vehicles at the FRSC Headquarters in Abuja, said the operational vehicles inaugurated will go along way to boost the operational activities of the FRSC.

SGF asserted that the vehicles will also gives the corps more ambiances to actually participate in the operational activities on the highways across the country.

He noted that the Federal Government is in sync with the efforts of the FRSC and thereby encouraged other government agencies to develop similar resourceful ways to improve their work processes in the cost-effective manner.

Mustapha, therefore congratulate the Ag Corps Marshal and the entire staff of the FRSC for the road safety management effort, as he also admonished that the patrol vehicles be deployed to cover the entire nation as soon as possible.

“While the Federal Government’s efforts remain consistent,it is only proper for its agencies tasked with certain regulatory aspects of the infrastructure to live up to espectation and it is in this respect that FRSC comes infor road traffic regulation. If the responsible regulators do not live billing, then government’s efforts would have been in vain”

“Let me reiterate that Mr President takes special pleasure in welcoming efforts like this as they add value to human existence and by extention humanity. I appreciate FRSC for its commitment to duty and wish the corps more achievements” he said.

The Ag Corps Marshal, Dauda Ali Biu in his welcome address at the inauguration expressed the Corps deep gratitude to President Buhari for approving the purchase of the vehicles.

DCM Biu also thanked the SGF for his untiring efforts to see that funds were made available for the loudable project.

He however appealed for improved funding of the corps to enable them realise their vision of full coverage of operational commands nationwide which includes 12 Zonal Commands, 37 Sector Commands,223 Unit Commands, 58 Outposts and 527 Station Officers.

“It is my pleasure to warmly welcome you to the official inauguration of 316 operational vehicles approve by President Buhari, for FRSC, comprising of 239 patrol cars, 49 Ambulances, 23 Tow Trucks and 5 patrol Bike and their formal unveiling for subsiquent deploment for nationwide operational activities”

Biu assured that the provision of the additional vehicles will definitely beef up the operational capability of the corps nationwide.

According to the Ag Corps Marshal, “In line with the contemporary trend in road safety and the giant strides taken to reposition the corps for maximum productivity, the FRSC is deploying more operational vehicles as another attempt to enhance overall patrol operations and to improve coverage and visibility on 204,000 kilometers of roads nationwide.

It will also assist our operative to seamlessly monitor and patrol their operating environment to further reduce road traffic crash fatality in line with goal 1 of FRSC 2022 corporate strategic goals, and the vision nof pillar 1 of Nigeria Road Safety Strategy 11 (2022-2030)” the Ag Corps Marshal stated.