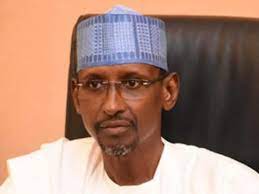 The FCT Minister Malam Muhammad Musa Bello has on behalf on the Administration expressed his condolences to the people of Jiwa in Abuja Municipal Area Council, AMAC over the death of Honourable Musa Tanko Abari, FCT APC Chieftain and Commissioner representing the FCT at the Revenue Mobilisation Allocation and Fiscal Commission.

The Minister who led Chieftains of the All Progressives Party, APC in the FCT and top officials of the FCT Administration on a condolence visit to Chief of Jiwa, HRH, Dr. Idris Musa and the family of the deceased, described the late Commissioner as a worthy son of Jiwa, whose death has created a vacuum in the hearts of the people.

Malam Bello who spoke in Hausa prayed for the repose of the soul of the late Tanko Abari and that Allah grants him eternal rest.

He also prayed that Almighty  Allah grant the family, friends and indeed, the people of Jiwa the strength to bear the loss, while also supplicating for good health for those he left behind as well as peace and growth in the community.

He said: “You have lost a confidant, you have lost a friend, and you have lost a neighbour. We are hoping Allah will forgive him and also give you good health, upliftment and bring peace in your community, FCT and Nigeria as a whole.

The Minister also visited the home of the deceased where he offered prayers with family members for the repose of his soul.

Welcoming the FCT Minister and Entourage to his palace, the Chief of Jiwa, Dr. Idris Musa, described the late Commissioner as a good man whose death has left a mark in the community and will be missed by all.

The Chief said, “The loss is not only for his children, it is for all of us, FCT residents and Nigeria as whole.  May Almighty forgive him and have mercy on his soul”.

He called on political leaders in the FCT to eschew politics with bitterness, stressing that life was short and each may be called to the Almighty at any time.

The Chief urged all to exercise caution in the use social media in electioneering, stressing on the need for all to work together to move the FCT and the country forward. “This is the time to be our brothers’ keeper. We all need each other. Together we stand, divided we fall”, he added.

On the Minister’s entourage were, the FCT APC Chairman, Alhaji Abdulmalik Usman, Chairmen of Area Councils APC party chieftains and senior officials of the FCTA.