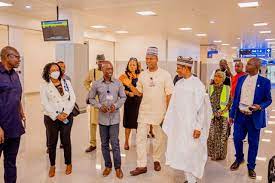 has said that Lagos International Airport remains one of the foremost Airports in Nigeria which had tremendously helped in projecting the image of the country.

Rev, Pam made this commendation when he held a strategic meeting with top officials of the Murtala Muhammed International Airport, Lagos and other relevant stakeholders at the Lagos International Airport on 19th May 2022, preparatory to the commencement of the 2021 main pilgrimage exercise to Israel, Jordan and Rome.

The Executive Secretary and his delegation were warmly received by the Regional Manager of the Murtala Muhammed International Airport, Lagos, Mrs. Victoria Shin Aba.

He explained that his visit was borne out of the fact that the Commission would soon commence the airlift operation for intending pilgrims by early next month and as such there was need to meet and fraternize with the management of the Airport to ascertain their level of readiness and identify likely challenges with a view to resolving them.

In the words of the NCPC Chief Executive, “By the way you warmly received us, it is a sign that you will cooperate with us for a hitch free airlift operations this year”.

He averred that NCPC is not new to Lagos International Airport, adding that the Commission has had long history of relationship with the airport over the years.

Rev. Pam solicited the assistance and cooperation of the Regional Manager in the area of securing permanent pass for the NCPC Lagos Zonal staff in order to facilitate access to some sensitive points at the airport during pilgrimage operation.

He commended the Lagos international airport for all the excellent services they are rendering for this great Nation.

Speaking, the Regional Manager Murtala Muhammed Airport, Mrs. Victoria Shin Aba reaffirmed the cordial relationship that has existed between the two organizations, especially in the area of airlift operations.

She assured her guest that the airport is ever ready to support and cooperate with NCPC in discharging her mandate.

Mrs. Victoria admonished NCPC on timelines and the need for adequate information flow before and during airlift operations.

On the COVID 19 protocols at the airport, she intimated the NCPC boss that the Nigerian Civil Aviation Authority, NCAA, had cancelled the spraying of  luggages at the airport and had also abolished spacing of seats while on board, but the use of face marks is still in force.

The NCPC boss was later conducted round the airport where he inspected facilities such as the VIP lounge, arrival and departure halls, conveniences, the new terminal wing, among others.

It would be recalled that the Executive Secretary also inspected facilities at the Yola International Airport fortnight ago.