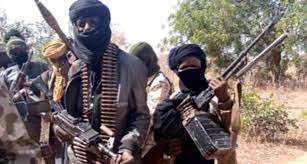 A brave commercial driver, Mr. Sunday ran into some heavily armed men suspected to be bandits, killing three of them on the spots.

The bandits were said to have invaded the ever busy Minna-Gwada high way to wreck havock on motorists when the commercial driver, who was on top speed ran into the bandits killing three of the armed men and zoomed off.

It was gathered that the bandits had earlier carried out their offensive attacks on some community in Mutundaya, Shiroro local government area where they rustled some cattle and kidnapped dozens of people, among them include three pregnant women from the local government.

It was also gathered that the bandits were armed with sophisticated weapons such as Ak47, Ak49 among other dangerous weapons who had earlier laid siege on the highway, waiting for vehicles to attack.

The armed bandits, according to information available to us, extended their operation to some communities in Kafi Koro in Paikoro local government and engaged the local vigilante corps and the military in gun duel as two of the bandits were gun down, while two others were arrested by the joint operatives of the vigilante and the military. Some of the bandits flee into the bush with gun wounds, abandoning their motorcycles.

Already, local in their large numbers have deserted their homes as a results of the invasion of the gunmen that have been operating in the affected communities for over 8 hours unchallenged.

A visit to the affected Communities by this reporter revealed that women and children were seen in their numbers trecking to the nearby villages to take refuge.

However, our reporter was told that some heavily armed military personnel, were drafted to both communities and were able to repelled the terrorists and neautrilized the armed bandits and recovered the rustled animals.

Information also revealed that during the gun duel with the soldiers who came in to the communities with sixteen Hilux vans recovered motorcycles as some terrorists escaped into the forest with gun wounds.

The Commissioner for Local Government and Internal Security in Niger State Mr Emmanuel Umar could not be reach for his comments as series of calls to his cellphone were not responded to.

However, the state commandant of Niger State vigilante corps. NSVC Yarima Nasir Manta, while confirming the report explained that his men and large numbers of soldiers are already on the trail of the fleeing bandits  Already, three of the communities are now ghost town as the local have deserted their homes, taken refuge in a nearby Internally Displaced Persons camp, IDPs in Gwada and a primary school in Chimbi community in Paikoro local government area.