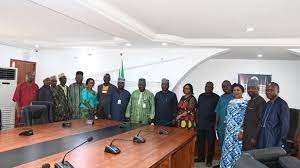 Nigeria’s geospatial repository and implementer of its Survey Coordination Act, SCA of 1962 and its subsequent amendments, the Office of the Surveyor General of the Federation, OSGoF is to embark on arrest and prosecution of violators of provisions of the SCA.

The Surveyor General of the Federation, SGoF, Surv. Abudulganiyu   Adeyemi Adebomehin says, “Individuals and groups cannot be allowed to continue to build or install infrastructure, generate geospatial information and data of other critical infrastructure without recourse to OSGoF”.

Surv.Adebomehin, who hinted on this while receiving a team led by Major General Samad A. Akesode, Director of Communications, Office of the National Security Adviser, ONSA to the President at the Survey House in Abuja recently commended President Muhammadu Buhari and the National Security Adviser, NSA, General BabaganaMongunu (rtd) for taking seriously to heart the issue of the violations of the provisions of the SCA which according to him are consequential to Nigeria’ sovereignty.

OSGoF, according to the SGoF, would commence full implementation and enforcement of the SCA hence ONSA has deployed a very high ranking military officer in the person of Major General Adesoketo work with OSGoF for the success of the operations meant to curb activities inimical to the provisions of the law regulating surveying and geo-informatics in the country.

While thanking the NSA for his quick response to the general request made by OSGoF, the SGoF appealed for the provision of military personnel for the safety of surveyors and other OSGoF staff during engagements particularly at international boundaries.

He mentioned that OSGoF had lost 5 staff during attacks at the Nigeria-Cameroun Border about 5 years ago.

In his speech, Major General Akesode commended the commitment of the SGoF towards infrastructural development and national security. He pointed out that there was need for every Nigerian to be patriotic for the general good of the country.

Major General Akesode said the relevance of the activities of OSGoF cannot be overemphasized, stressing on the need for its collaboration with relevant authorities, the Nigerian Communications Commission, NCC, IHS Towers, one of the largest independent owners, operators and developers of shared telecommunications infrastructure on earth.

The military chief pledged the support of the NSA to OSGoF in order to especially generate geospatial information the locations and heights of on all obstacles in the country. He noted that such information for masts and other installations around the airports was necessary to guarantee safety.