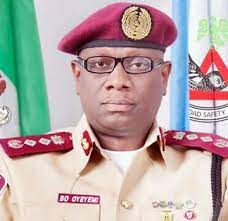 Due to high mobilisation and deployment of personnel and logistics for enhanced visibility of operatives on the highways during the just concluded 2022 Eid-el fitr special patrol that lasted from 29 April, to 04 May 2022; the Federal Road Safety Corps, FRSC has stated that it rescued 360 people without injuries from a total of 119 crashes involving 701 people.

This figure, according to the data released by the Corps represents 35.3% increase in total number of people rescued without injuries.

The Corps Public Education Officer of FRSC, Bisi Kazeem who made this public stated that 266 people were rescued without injuries in the same period in 2021, while 360 were rescued during the 2022 Eid-EL Fitr special patrol without injuries, which marks 35.3% improvement on 2021 record. However, he noted that the number of persons rescued with injuries from road traffic crashes during the celebration period is 292.

He added that of the 701 persons involved in road traffic crashes during the 2022 Eid-el Fitr celebration period, a total of 49 people were killed.

Quoting the Corps Marshal, Dr. Boboye Oyeyemi, Kazeem stated that the Corps now has a wider coverage due to the establishment of more FRSC Commands, Outposts, road side clinics and Zebra points who now feed in reports from different routes that were hitherto not thoroughly covered. He stressed that the increase in number of road crashes, increase in the number of persons involved, and increase in the number of persons killed is due to the reports that emanated from the new FRSC formations.

In view of the directive of the Corps Marshal which is a move away from other years where the focus was on critical corridors, Kazeem noted that the Corps intensified its Patrol operations and Enlightenment campaigns by giving adequate coverage to all identified routes across the country.

Analysing the records for the 2022 special patrol, the spokesperson said that a total of 4701 offenders were apprehended; while a total of 5877 offences were recorded; and a total of 2259 impoundments were made.

Further to this, Kazeem disclosed that in 2022, enlightenment through Motor park rallies and Radio Programmes increased tremendously.

Kazeem noted that just like the Easter special operations, the Corps did not record any assault on its operatives and this could be attributed to enhanced stakeholders collaboration and engagement, increase in Public Enlightenment, and the introduction of the body and vehicle camera for operatives.