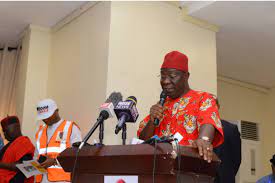 Former Deputy Senate President, Senator Ike Ekweremadu, has advised the leadership of the Peoples Democratic Party, PDP in Enugu State to ensure transparent and credible processes in the run up to the 2023 general elections in the state.

Ekweremadu, a frontline governorship aspirant, said such was critical in not only ensuring that the most popular candidates emerge, but also in the cohesion of the party going into the general election.

The former Deputy Senate President, according to a statement by his media aide, Uche Anichukwu, spoke in Enugu on Tuesday during a consultative session with the leadership of the Enugu State PDP, explaining that he was at the state’s party secretariat to solicit the votes of the party leadership as statutory delegates.

He noted that decisions made by delegates in electing candidates would not only have massive impacts on the party’s fortunes at the general election, but also the quality of governance after election.

“I am here essentially to solicit votes because all members of the party’s state executive are statutory delegates, starting from the House of Assembly to the National Assembly, and ultimately the gubernatorial primaries.

“I am also here to further advise them to ensure a free and fair process. I would love to see everybody at the end say that our delegates and primary elections were free and fair. That is the only way we can ensure justice, equity, and peace.

“I am looking forward to a process that will be very transparent and productive so that we can all go to the election after the primary as one strong house, undivided.

“I am equally calling on all stakeholders and aspirants to various offices to toe the path of sportsmanship and democratic ideals of the PDP. That way, the PDP will emerge stronger,” Ekweremadu stressed.

Earlier, the state chairman of the party, Hon. Augustine Nnamani, commended Ekweremadu for his contributions to what the PDP is today at both the state and national levels, adding that the lawmaker had always shown good faith at all times.

He, along with other speakers also assured that the party would ensure a free, fair, credible, and transparent process.