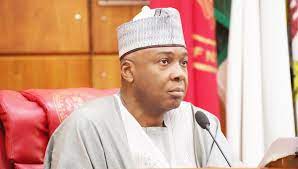 Former Senate President and Presidential Aspirant of the Peoples’ Democratic Party, PDP, Dr. Bukola Abubakar Saraki, has said that Nigeria as a nation is passing through a trying moment that need an energetic, courageous and vibrant leader that can fix the country right for the overall betterment of all Nigerians.

Bukola Saraki stated that the country is no longer as issue of insecurity is everywhere, adding that Nigerians as people cannot travel by either by air, train or by road, describing the situation as worrisome.

Addressing the PDP delegates at the party’s Secretariat in Minna at the weekend, Dr Bukola Saraki maintained that the increasing rate of kidnapping, cattle rustlings and other heinous crimes bedeviling the country under the ruling All Progressive Congress, APC, posed  serious threat to the survival of the country as a nation.

According to the former Senate President, “No part of the country is saved as a result of insecurity ranging from kidnapping for ransom, cattle rustling among others, insisting that the security challenges in the North Central and North west of the country is alarming.

“I am here in Niger State which is a hot bed of the North Central State to request for your vote at the party convention so that we can fix our dear country back to the peaceful and secured country that It use to be. Bukola Saraki for president 2023 is a collective project of North Central State.

“And that is my reason of coming to meet the delegates from this state to seek for your votes at the party convention.” he begged the PDP delegates.

He stated further that with the current situation in the country Nigerians at all levels regardless of tribes and religious inclinations, required a leader that will be courageous enough to face the reality on ground to surmount and confront the challenges with all sincerity of purpose to put the country on the proper track that would improve the wellbeing and the survival of the people.

“Nigerians as people have passed through the worse leadership of their lives in the history of the country. And my prayers is that never again should we as a nation encounter this unfortunate and sad experience in our democratic history as a country” he asserted.

Assuring that if voted in to office as the President come 2023, he will operate all inclusive government that everybody will make an input that would propel the administration to the betterment of all citizens.

He pointed out that his administration will involved youths, women and critical stakeholders as well  as professional of all endevours that would bring about speedy development to the country, stressing the needs for the Niger State delegates to see reasons to give him their mandate at the convention.

In his good will remarks, the former Governor of Niger State, Dr. Mua’azu Babangida Aliyu described the former Senate President as dependable and reliable person that need to be taken with all seriousness, urging the delegates of Niger State to give him their mandate at the party primaries.

He noted that Dr. Bukola Saraki was committed to the Nigeria projects as a Chairman of Nigerian Governors Forum, while he was the chairman of the Northern Governor’s Forum, saying that they have worked together and his commitment to Nigeria could best be described as inestimable”