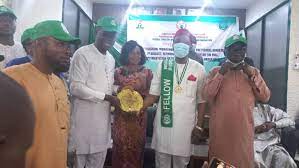 Academic Staff Union of Research Institutions, ASURI, has honoured the Minister of Science and Technology, Dr. Ogbonnaya Onu, as the first Nigerian to be inducted into the union’s Hall of Fame due to his outstanding and impactful performance  in the areas of research, science and innovation since he became minister.

Onu was inducted at the weekend in Abuja as “the Most Labour Friendly Minister of the Federal Republic of Nigeria since independence” shortly after he declared open a one-day sensitisation of staff of the Federal Ministry of Science, Technology and Innovation on the full implementation of Presidential Executive Order No.5, by the strategy Implementation Task Force for Presidential Executive Order No.5.

Part of a citation jointly signed by the President of ASURI, Dr. Nnamdi Onunka, and the Secretary General, Dr. Theophilus Ndubuaku, reads, “It is remarkable and noteworthy that you are the first ever inductee into the Hall of Fame of our great union. And we have no iota of doubt about your qualification for induction into the newly created ASURI Hall of Fame.”

Speaking on the honour done to the minister, the Secretary General explained that the Hall of Fame was established by ASURI, to keep records and induct people who had been instrumental to strengthening the union, by making remarkable impacts on the activities and struggles of the union.

Ndubuaku pointed out that ASURI had been battling with issues of non-adequate attention to research in the country, which had been the bane of development since independence.

He, however, noted that it was in the last six years when Onu mounted the saddle as Minister of Science and Technology, that the government started paying attention to those problems as well as taking measures towards addressing them.

According to him, less than two months after Onu was appointed in 2015, he caused  the National Research and Innovation Council to be inaugurated by President Muhammadu Buhari, stressing that it was a proof that Onu had the issue of the Research Council at heart before becoming the minister.

The Secretary General recalled that immediately the Council was inaugurated, a bill was forwarded to the National Assembly under Onu’s supervision, for an Act to be promulgated into law to give the Council a legal backing to operate.

He, however, noted that although the bill was passed by the Eight National Assembly, President Buhari did not sign it into law, lamenting that it appeared that relevant government functionaries did not make the right presentation to the President to convince him sign it into law.

He stated further, that the minister had helped in the re-introduction of the bill to the National Assembly, noting that it had gone through first and second readings  as well as public hearing, and now awaiting final passage, saying that Onu was determined to get the bill assented to before the expiration of his tenure.