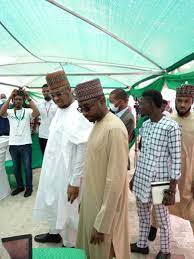 As the Federal Government joins the rest of the world to commemorate 2022 United Nation World Creativity and Innovation Day, WCID, the Minister of Communications and Digital Economy, Prof. Isa Ali Pantami, has highlight the importance of skills over paper qualifications.

The Minister in an address on Thursday at the event emphasized that priority and preference are no longer given to class of degree but innovative ideas individual is able to graduate with that would be of a benefit to him and the country at large.

Pantami asserted that no country can development its digital economy without prioritizing digital innovation, saying that the desire of President Muhammadu Buhari towards this direction has yielded positive results, most importantly as innovation and entrepreneurship remain the two prerequisites currently being explored by the country in developing its indigenous digital economy.

“The approach today is that when a student gets admitted into a higher institution, he would be directed to come up with his start-up within a year, work on this till he graduates with his own company and becomes a potential employer. That is the best way of managing the challenge of unemployment, particularly in Nigeria, where we have the challenge of unemployment and unemployability.

“You cannot innovate without creativity and you cannot be creative without critical and analytical thinking. The wisdom behind this celebration is to create awareness where people globally will understand how important it is to be creative and innovative, particularly towards problem-solving” the Minister said.

Pantami applauded the Director General of NITDA, Mallam Kashifu Abdullahi and members of staff of the Agency and the two subsidiaries, including the National Centre for Artificial Intelligence and Robotics, NCAIR and the Office for Nigerian Digital Innovation, ONDI, on their achievements on behalf of the Federal Government in digital innovation and entrepreneurship.

The Minister also charged the agency and its subsidiaries to redouble efforts in promoting innovation and creativity, saying the “reward for hard work is more work”.

Prof, Pantami urged all the participants at the event not to make the commemoration just a one-off thing but rather encouraged them to identify the challenges Nigerians are confronted with and collectively or individually proffer solutions that would address issues in different sectors of the economy, such as security, health, finance, education, security, agriculture, governance among others.

He said that President Buhari administration has done so much in supporting the ministry and the sector in general, importantly by coming up with several policies; some of which he said, brought about the creation of subsidiaries, NCAIR and ONDI, start-up bill, which seek to address the set back being experienced by young Nigerian innovators.

The Minister however expressed the hope that when the bill becomes a law, it will definitely address more than ninety percent challenges confronting innovators in the country.

Abdullahi stressed that the initiative aligns with the National Policy and Strategy for a Digital Nigeria, adding that it would help Nigeria create and capture value from innovation.

According to DG, “We are targeting Security, Agriculture, Health, Education and FinTech. Thankfully, we have many of them here showcasing what they have done in collaboration with the centre. Innovation is the wealth of the 21st-century economy and it’s only through innovation that we can solve problems, and create wealth and prosperity for our country. Therefore, NITDA and the centre are doing what is going to transform Nigeria into a leading digital economy”

Prof. Pantami who revealed the efforts of the agency over the years in supporting young innovators and startups with not just grants, also engaged in mentorships and promotion of their different innovative solutions at local and international level.

The NITDA boss noted that since the centre was inaugurated, it has organised multiple innovation challenges, including the Bridge to Mass and iHatch Challenge.

He appreciated the Minister for his continuous support, as he also expressed optimism that the agency will not relent in working towards achieving the bigger picture of the Federal Government of achieving a Digital Nigeria by 2030.