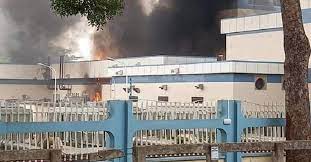 Fire has broken out at the office of the Central Bank of Nigeria, CBN Makurdi, early hours of Thursday, April 21, 2022.

It was revealed that inside the building of the bank was badly affected but as at the filling of this story, the cause of the fire and extent of damage was yet to be determined.

Victims of the attack include twin brothers; one died on the spot and the other is still responding to treatment at an undisclosed medical facility in the state.

The attack which took place at about 9pm is coming barely one year when the town was attacked by terrorists, killing several residents.

Eye witness revealed that the insurgents came on foot from different directions and wrecked havoc on Wednesday with setting ablaze the Technical College.

Gaidam is the home town of the immediate past Governor, now Senator Ibrahim Geidam located north of Yobe state.

Confirming the incident, Executive Chairman of Geidam, Hon Ali Kolo told journalists that the armed insurgents killed as they invaded some parts of the council.

Kolo revealed that properties worth millions of naira were destroyed.

The chairman however said, he was in Saudi Arabia for the lesser hajj, it is unfortunate for him to have received distress call on the renewed attack on the people of the community.

“Based on the information at my disposal, Boko Haram have so far killed invaded Gaidam and razed down some structures including Technical College when I am in Saudi Arabia for the lesser hajj

“I also gathered that twin brothers were among victims of the casualty.”

“Right now, I am making frantic efforts to get in touch with relevant security agencies, but there is no concrete evidence as to whether the attack have been repelled as insinuated.” he stated.