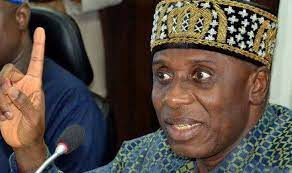 The Federal Ministry of Transportation has threatened to sanction liable terminal operators, who obstruct Federal Governments efforts aimed at enhancing the ease of doing business at the nation’s ports.

Minister of Transportation, Rt. Hon. Chibuike Rotimi Amaechi, stated this today at the flag-off of the Ports Standing Task Team’s “Operation Free the Ports Corridors” of perennial gridlock witnessed along the Apapa-Oshodi expressway.

The Minister, who was represented by the Permanent Secretary, Federal Ministry of Transportation, Dr. Magdalene Ajani, said “Terminal operators are tenants of the Nigerian Ports Authority and there are terms and conditions for their operations and they can be brought to  book”.

She made this assertion following allegations that the operators intentionally delay containers to accumulate demurrage while making it compulsory for clients to pay deposit on them and still slow down the process so that the required number of days elapses, causing the importer to lose the deposits.

Speaking further, she said: “The greatest thing that can happen to Nigeria is that Apapa ports remains free and business transactions are achieved in less than 24 hours”. This and more she affirmed can be realised when all agencies operating at the ports adopt a Standard Operating Procedure geared towards achieving the Nigerian Port Process Manual.

While directing the Nigerian Ports Authority, NPA, to repair the failed sections of the roads, she equally informed of ongoing discussion with the Federal Ministry of Works on how to ameliorate the roads before the rains set in.

Narrating how getting to Apapa port was an impossible task in December of 2020, the Permanent Secretary lauded the Ports Standing Task Team for making it possible for her to get to Apapa from the airport in just 40 minutes.

While acknowledging that a lot still needs to be done in areas of access roads, she prayed what has been achieved, should be sustained

The Executive Secretary, Nigerian Shippers’ Council, Emmanuel Jime, in his presentation “congratulated the Ports Standing Task Team for having succeeded in forming the group as an enlarged task team for the purposes of removing illegal checkpoints and shanties along the port corridors”.

On the issue of Stakeholders commitment towards resolving the challenges at the ports, Jime said: “I am particularly excited because of the level of buy-in obtained from the Stakeholders, coming from both the public and private sectors. It goes just to demonstrate how all of us are eager to rid the port corridors of the anomalies we witness daily”.

He assured the relevant stakeholders on behalf of the task team that the operations will be conducted without undermining the provisions of any agencies Standard Operating Procedures, SOP or Act, adding that the team is also mindful of all legal and Institutional frameworks guiding the operations of all agencies operating within the corridor.

Speaking also, the General Manager, Monitoring and Regulatory Services, Nigerian Port Authority, Eniola Williams, who represented the Managing Director, NPA, Mohammed Bello-Koko, attested to the MoU in the area of enforcement of minimum standards for Trucks, adding that the Federal Ministry of Works has been reached to ensure that the roads are rehabilitated, as it is a factor that needs to be addressed aside from streamlining the checkpoints and individuals along the port corridor.

The Chairman Apapa Local Government Area, Lagos State, Idowu Sebanjo, called on all government agencies to return Apapa to the Port City status she hitherto enjoyed. “It is our mission in the local authority to make Apapa a modern city, where things are done properly, people living properly and the environment is clean and conducive for everybody.