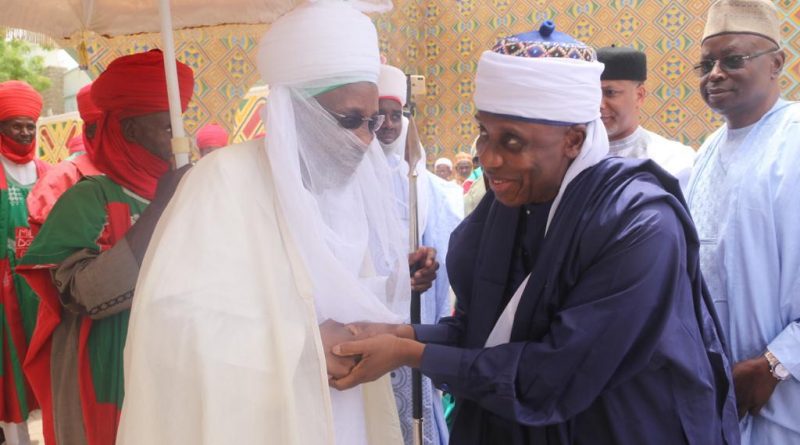 As the Minister of Transportation and frontline Presidential aspirant, Rt Hon. Chibuike Rotimi Amaechi continues his political consultations in the North West, the Emir of Dutse, HRH Alhaji Nuhu Mohammadu Sanusi has described the Minister as the best man for the country’s number one job.

The Emir who made the remarks at his Palace in Dutse, Jigawa State, Tuesday, said his convictions were predicated on the Minister’s performances both as a former Governor and as a Minister.

The Emir said, “He is an honest man, and whatever you say about him, you cannot change the fact that he is an honest man. He is a confident person. Wherever you see him you know he is the meaning of total confidence. These are qualities of leadership. These are things that we need in a leader especially today, people who are confident, who can face realities and challenges. He is resilient. His resilience I will tell you also, if Amaechi wants to achieve something, by whatever means, he will find a way to get it done, because he is a communicator. This is why I have endorsed him. I have high regard for him and I have confidence in his executive capacity. He is fully competent, being a speaker twice. He is most qualified.”

He recalled that Amaechi as Governor of Rivers State fought insecurity to a standstill and also improved the lives of his people.

“In Nigeria, we are always carried away by tribal, political and other issues but here’s a Nigerian that I know, and Amaechi is a true Nigerian who is detribalized. He provided a place for Muslims to worship in Rivers State which I understand are been destroyed after he left, he endured all the humiliations targeted at making the Muslims feel unwanted in Port Harcourt, and I also know that God will reward him.

“In this country, we are faced with distress, and part of it is by our own making, not the government. What are these issues? Job opportunities, fighting corruption, Infrastructural development and social vices such as armed robbery, banditry and so on. These are the problems that are facing our country today. My knowledge and understanding  of this gentleman man, Chief Rotimi Amaechi, Minister of Transportation is that he has what it takes to fight insurgency. He did mention one, that when he was Governor, there was criminality and other vices and he was able to control it.

“I am sure he would do this better now if he becomes the President. With all the resources available, he would use it to fight insurgency and other vices that are affecting us, particularly here in the North.

“He is a bridge builder and he is a man who is always meeting people. About 16 years ago,  this Council decided to adopt children from Rivers State, particularly from his local government area, Ikwerre, we adopted the 16 children, put them in school with my own children, most of them are graduates, some are married now, and when I told him, he was very grateful and I have high regard for him and I have confidence in his capabilities,  so he knows what to do, he is not a new hand, and he won’t bother himself buying houses and building houses, and so, he is fully most qualified for the job”, Emir Sanusi said.

Explaining further about Amaechi, the Emir noted that it takes a man with good leadership qualities to respond swiftly to the yearnings and aspirations of the people.

“When I heard about the train going to Maradi, I called Amaechi to ask why the train was not passing through Dutse, and he told me that he would do something about it. And this gentleman, three months later was able to get the approval for Dutse to be included in the Kano-Maradi rail line, this is the Rotimi Amaechi that I know, and I hope you will come back like you brought Buhari two times here to campaign for him, we hope the next visit will be when you clinch the seat,” he said.

Earlier, Transportation Minister Chibuike Amaechi said he was at the Emir’s Palace to solicit the support of the Emir and people of Dutse and Jigawa State in the forth-coming APC Presidential primaries. Amaechi assured the Emir that if given the support, he would see to the commencement of the Kano-Maradi rail project which also goes through Dutse.

Amaechi also stressed that the issue of insecurity which is currently affecting the country would be a thing of the past.

“We have been friends when I was a Governor and it continued till date. I have a lot of connection with Jigawa, therefore, I will not commence my activity, my search to seek the support of Nigerians to vote for me to be the President without coming to Jigawa to see you and the people of Jigawa State to support me,” he said.