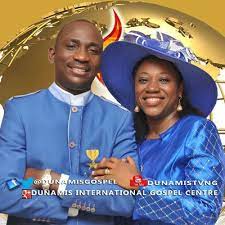 Group under the Auspices of Equal Right And Value Gender Advocacy Forum, has described as preposterous and begotten from sheer bitterness the call by Nollywood actress, Georgina Onuoha, calling for the revocation of the medical licenses of Pastor Paul Enenche of Dunamis International Gospel Center and his wife, Becky, after the death of gospel singer, Osinachi Nwachukwu.

The group in a statement by its National Coordinator Mr. Johnson Obiora, which was made available to journalists in Abuja on Tuesday, further described the Onuoha’s statement as misplaced priority, un-genuine, unpatriotic and baseless; adding that recent issue on ground has nothing to do with medical license of the Dunamis Pastor and his wife.

It stated that both Dr. Enenche and his wife are qualified medical practitioner in Nigeria, legally registered to practice medicine in Nigeria, adding that the Nigerian Medical Council has a constitution, explicit provisions of what disqualifies a medical doctor in Nigeria and if need be to revoke the license, not by a mere call of a Nollywood actress.

The group said, revocation of license can only be contemplated when the practitioner is unable to carry out his duties as enshrined in the 1999 Constitution on the ground misconduct, unprofessionalism, insanity or ill health.

“It is regrettable and despicable that despite these clear provisions of the constitution, some persons lurking under the cloak of quasi celebrity personal and looking for cheap popularity chooses to amplified calls for revocation of licenses of medical doctors turned great man and woman of God.

“These pseudo Nollywood personalities have taken her act theatrics to another level with calls on Enenche’s licence to be revoked. Like one dancing naked in the market square, these pestle-wielding critics premised her contention on the prevailing revelation of a killer husband of late gospel singer Osinachi.

Anybody that follows the ministry of Dr. Enenche and his wife will testify that they both preache against abusive marriage and has always condemned it in totality.

“The call for revocation of his license is preposterous and begotten from sheer bitterness. The Senior Pastor of Dunamis is a strong man of God that has also paid his dues both in medical professional, Ministry and service to the nation at large.

“What then is the justification for these calls? Deductions from her irrational presentation betray the fact that she is amongst the same people sponsored by ‘deep pocket’ enemies within to overheat the polity.

“We all know that such disgruntled elements and her sponsors will find it difficult not to support any evil against the man of God.

“The call to revoke his license and that of his wife is not only unfortunate but irresponsible and myopic. How else can one explain the call by mundane Nollywood actress for the revocation of medical professional license without any fault in a sane society? These persons and their sponsors should know that Nigeria is bigger than their pedestal and parochial interests of myopic Onuoha” they stated.