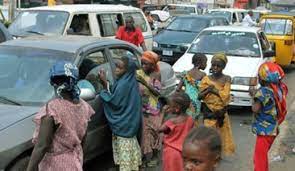 The Federal Capital Territory Administration, FCTA has evacuated one hundred and fifty beggars and destitute from the major streets of Abuja.

The beggars, said to been constituting nuisance on the streets of Abuja, were taken off the street by officials of the Social Development Secretariat, SDS in collaboration with the Abuja Environmental Protection Board, AEPB and other security personnel.

The Secretary, Social Development Secretariat, SDS, Hadiza Mohammed Kabir, said the beggars would be properly profiled, after which the FCT Administration will liaise with all the governors of their states of origin for repatriation.

The Secretary also hinted that a ministerial pardon was giving to those evacuated during the weekend with a strong warning, to keep off the streets.