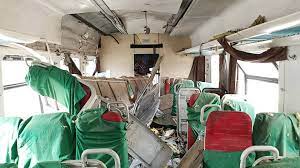 Minister of transportation, Hon. Chibuike Rotimi Amaechi has revealed that the ministry is working with security agencies to ensure safety of kidnapped victims of Abuja-Kaduna railway corridor.

Amaechi stated this on Thursday in Abuja at the ministry’s annual press briefing, assuring the families of the victims’ safety of those abducted.

The minister, who asserted that security is the fundamental to an effective and efficient transport system in the country noted that the physical infrastructure as well as security architecture is critical to a safe and sustainable transport system.

According to the Minister, “There have been series of canalization and theft of railway assets and equipment. The latest is the attack on the Abuja-Kaduna rail corridor.

“Within the period under review -6 High-Tech Toyota Hilux Patrol vehicles were donated by the Ministry to the Nigerian Railway Corporation, NRC to safeguard the Abuja-Kaduna Rail corridor. There are further interventions being proposed for rail security awaiting cabinet approval”

The Minister, who was represented by the Minister of State for Transportation, Senator Gbemisola Ruqoayyah Saraki, noted that despite myriad of challenges ranging from insecurity, operational challenges, inadequate funding, among others, the ministry has recorded significant achievements in the rail subsector with the habilitation, construction and expansion of railway line within Nigeria and neighbouring countries.

She said, “In the same vein, Maritime sub-sector recorded trail blazing successes in the last one year; notably of such successes in the reduction in the Apapa gridlock and the deployment of the Deep Blue Project.

“In addition, the signing of the Suppression of Piracy and Other Maritime Offences, SPOMO Act. The road subsector is currently undergoing some reform initiatives that will change the narrative of the sub-sector when fully implemented”

Senator Gbemisola assured that the Federal Ministry of Transportation is undeterred by the challenges but rather determine to deliver an exclusive and world- class transportation system.