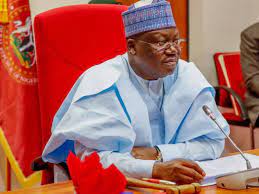 Senate President, D r. Ahmad Lawan, has called for thorough investigation into the unfortunate incident at Garin Alkali in Bursari Local Government of Yobe State in which a motor driver was reportedly shot dead.

The incident ignited violent protests in the neighbouring town of Gashua, the headquarters of Bade Local Government on Saturday.

Lawan, in a statement issued on Sunday by his Special Adviser on Media, Ola Awoniyi, sympathised with the family of the victim, saying whoever that has a hand in the killing must be brought to book.

“I am deeply saddened by the tragic news at Garin Alkali on Saturday and the violent reactions that followed it. The killing of the innocent driver is wicked and reprehensible. It should not be condoned for whatever reason.

“My heart goes out to the family of the victim. May Allah console them over their bereavement.

“I urge the authorities to thoroughly investigate the incident with a view to establishing why and how it happened and applying appropriate sanctions to deter future reoccurrence.

“I also appeal for calm and assure the peace-loving members of the community that justice will be served in this matter.

“I urge members of the community never to take the law into their hands whatever the provocation as such reactions often lead to further tragedies,” Lawan stressed.

The Senate President commends the Yobe State government and the Police for their quick intervention which helped to quickly douse the tension and restore normalcy to the affected community.