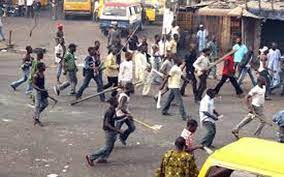 Three persons were killed and many others critically injured during clashes between two rival groups of hoodlums, popularly known as ‘Area Boys’, at the Lagos Island area of Lagos State.

It was reported that the clashes started on Thursday, which involved hoodlums from the Idumota area of the Island and their counterparts from Kosoko, Martins, Tom Jones and Oluwole.

The two factions shot sporadically between Thursday night and Friday morning, causing serious confusion among residents and traders in the area.

A resident, who spoke to our correspondent on Friday, said that the clashes were a superiority battle between the groups.

He however claimed that the hoodlums had belonged in the same group before some of them revolted against their leader who is a top member of the National Union of Road Transport Workers, NURTW.