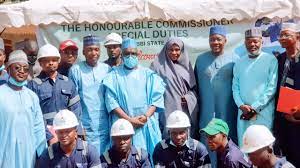 The Kebbi state Government has concluded arrangement to train 300 solar energy technicians as part of its efforts to bolster renewal energy use in the state.

Commissioner for Special Duties, Barrister Attahiru Maccido confirmed this during the flag off ceremony for the in-house training for the first batch of the selected youths.

Maccido, explained that, the training was in collaboration with a United States of America company for a period of ten weeks.

According to him, the 300 selected youths comprising150 young girls and 150 young boys would be under the tutelage of the US company which would commenced by February.

He said however, before the arrival of the US company that would fully train the youths, an in-house training has been arranged to fully equip the youths with computer and the necessary basic skills in order to make their training easier.

He averred ” the future is already here. We are partnering with the solar energy department at Usmanu Danfodio University, Sokoto.

‘ The Governor of Kebbi state is working hard to ensure that we start producing our solar panels and other accessories here in Kebbi state,not importing them. So, the future is already here.

“We are starting with 150 girls. We are already in collaboration with the solar company in USA through Diaspora Commission and their training will start in February, 2022 and instead of waiting for the arrival of these experts, we decided to start with our own in – house training so that when they start,  it would be  easier for them to learn and comprehend what they are taught”.

Maccido thanked Governor Abubakar Atiku Bagudu for his moral and material support , particularly his passion for the development of youths in the state.

The Special Adviser to the Governor on Power, Alhaji Yusuf Haruna Rasheed urged the participants to be dedicated to the training, saying that, it was a training that required serious attention and concentration.

According to him, “As women, we deem it necessary to start with you because you are the bedrock of the society.

“When women are productive and are contributing to the societal development, surely, the sky is the limit for that society as far as development is concerned”, he said.

Haruna-Rasheed enjoined them to utilize the opportunity in order to progress in their lives and for the betterment of their families.

In his remark, Umar Faruk, one of trainers to conduct the in -house training, who also recently passed out from the National Power Training Institute Nigeria, NAPTIN sponsored by Kebbi State Government, thanked the State Government for sponsoring them to attend numerous training programs on power and solar energy at NAPTIN.

He said that, the training afforded them the opportunity to learn more about Power and Solar energy assuring that they would in turn reciprocate by training other youths.

”We are ready to cascade same knowledge to the younger ones in the society. We equally thanked the governor of Kebbi State, Senator Abubakar Atiku Bagudu for his massive supports particularly the sponsorship by Kebbi State Government for our training ‘, he said.