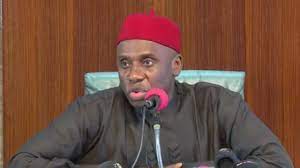 Minister of Transportation, RT. Hon. Rotimi Chibuike Amaechi has said that the need to embark on huge transport infrastructure investment across the Country to ensure efficiency in the Transportation Sector cannot be underestimated.

The Minister made this assertion on Monday in Abuja while delivering a speech at the 2-Day International Conference entitled, “The Role of Transportation on African Intercontinental Free Trade Area” AfCFTA.

Amaechi, who was represented by the Minister of State, Transport, Sen. Gbemisola Saraki, noted that transportation sector remained the most critical in implementing Trade Facilitation, enhancing regional integration and key to every other AfCFTA.

Some of the interventions he said include, “massive construction of roads, rail lines with access roads, inland water ports, seaports, new terminals in existing ports, dry ports with access to rail and roads, Inland Container Depots/Freights all geared towards building a modern and efficient transportation system that guarantees sustainable socio-economic development of Nigeria, regional integration and trade liberalization.”

According to Amaechi, “Transportation is essential for economic and social development, it provides vital links between centers of production and markets; and aids in facilitating the flow of goods and movement of people along corridors, linking the different points of activities and thereby promoting regional and national integration and development.

“Transportation and the African Continental Free Trade Area, AfCFTA are like Siamese twins as; they are intricately linked. Transportation provides the vehicle through which the major objective of AfCFTA thrives; that is, creating a single continental market for goods and services with free movement of businesses, persons and investments, promoting regional and continental integration, market access and resources reallocation across sectors and countries”

The Minister pointed out that, having taken cognizance of the pivotal role Transportation plays in AfCFTA implementation, the ministry is making concerted efforts in Improving Intermodal Transportation and Trade Facilitation by linking major Seaport Ports in the country with rail line starting with the Apapa Port Complex.

Minister of State for transport, Sen. Gbemisola Saraki in a key note address at the conference revealed that government has upgraded the road by deploying innovative funding approaches for strategic road projects which she said include the Presidential Infrastructure Development Fund, PIDF.

She further disclosed that over a billion dollars was channelled in three flagship projects: the Lagos-Ibadan Expressway, the Second Niger Bridge, Abuja-Kaduna-Zaria-Kano Expressway and the Highway Development and Management Initiative, HDMI.

“It is common knowledge that the Air Transport subsector is picking up well after the COVID-19 global aviation disaster. Bilateral Air Agreements are being restored gradually and the ongoing plan to concession four major International Airports” she said.

Also speaking at the conference, the Director General of the Nigerian Institute of Transport Technology, NITT, Zaria, Dr. Bayero Salih Farah said it will not be out of place to say that transportation is the gateway to economic growth and prosperity, adding that every other sector depends on transportation for growth and progress.

“That is why the current administration under the leadership of President Muhammadu Buhari has realized the critical role of transportation, and is working assiduously to make the Nigerian transport system among the best in Africa” he said.