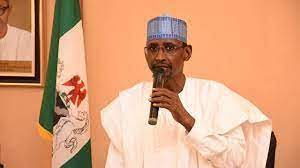 …urges embrace of the virtues of sacrifice, patience, tolerance and fellowship

The Hon. Minister of the Federal Capital Territory, Malam Muhammad Musa Bello has felicitated with Muslims in the FCT on the occasion of the Eid- el- Maulud celebrations, urging them to adhere to the cardinal principle of peace upon which the religion of Islam is built.

The FCT Minister, who said this in his Eid-el-Maulud message to FCT residents, equally enjoined all Muslim faithful and other residents of the FCT to join Nigerians from across the country to reflect deeply on the role they can play individually and collectively to build a nation of which they can be proud.

As the nation inches closer to increased political activities, the Minister said “we must recognize that the resort to violence or promotion of anarchy has never, and will never resolve our social or political variances”.

“Therefore, there is the need for us to imbibe the true meaning and virtues of sacrifice, patience, tolerance and fellowship in our relationships and dealings with fellow residents and all Nigerians” the Minister added.

Malam Bello then urged residents to always embrace dialogue in settling differences and reject attempts by unpatriotic individuals or groups to incite unrest which he said is always counter-productive.

He also reminded residents that the Federal Capital Territory was built on a foundation of unity and tolerance for all Nigerians, and emphasized that as residents, they are obliged to imbibe and practice these principles

Malam Bello also used the opportunity to restate the commitment of the FCT Administration to the provision of adequate security during the Maulud celebrations, and also appealed to residents to always cooperate with the security agencies at all time by providing useful information that will assist them in the discharge of their responsibilities.

Speaking on COVID-19, Malam Bello called on residents to be mindful of the disease which he said is still very much in the FCT, and urged them to continue to observe all non-pharmaceutical interventions to prevent its spread.