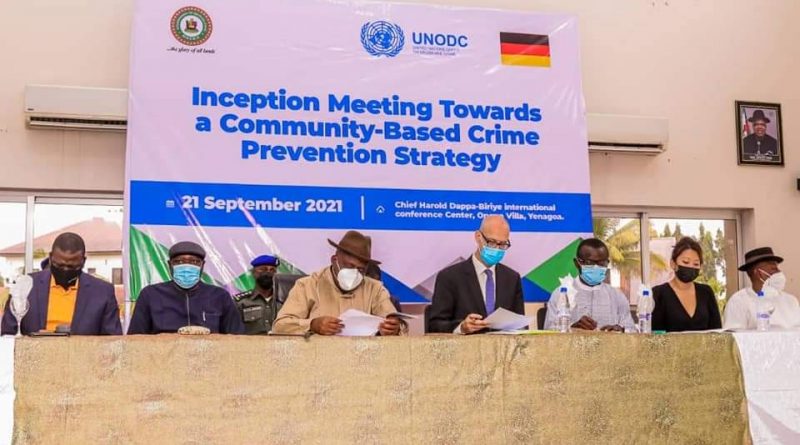 The United Nations Office on Drugs and Crime, NODC, together with the Bayelsa State Government and with the support of the Government of Germany organised an inception workshop to address crime and insecurity in the Niger Delta on 21 September 2021 at the Golden Tulip in Yenagoa, Bayelsa State.

The inception meeting launched the consultative process for the development of a comprehensive community-based crime prevention strategy and action plans initially targeting select communities across the Niger Delta region.

In his opening speech, Governor Diri stressed the importance of addressing the root causes of crime and insecurity and to design a pan-regional response to the crisis, based on the traditional ties among the coastal communities across the Niger Delta and the wider Gulf of Guinea. In this context, he further pledged that “the Bayelsa State Government under my leadership will support and work with the UNODC in actualising this project and propose to host the Gulf of Guinea Security Conference”.

In return, the Country Representative of the UNODC Nigeria, Oliver Stolpe expressed profound appreciation to the Bayelsa State Government for its hospitality and support.

He highlighted that UNODC for several decades had provided extensive support to both government and civil society organizations developing laws and policies, strengthen institutions, build operational capacities of security and justice sector personnel.

The objective of the project was to complement these efforts by directly engaging communities at the grassroots level in addressing the factors driving crime, insecurity and impunity in the Niger Delta.

He further thanked the Government of H.E. Senator Douye Diri for inviting the UNODC and pledged to work towards achieving a “whole-of-society” approach to tackle these issues in the target communities in the Niger Delta region and build sustainable and trusting relationships between local communities and security and justice actors.

The event was further attended by King Jaja, Natural ruler of Opobo Kingdom and Chairman of Rivers State Council of Traditional Rulers.

In his remark, speaking on behalf of Traditional Institutions and Communities, he emphasized that there is an urgent need to address the problem of drug use among young people. Noting that there is a link between drug trafficking and insecurity.

Other traditional ruler, King Bubaraye Dakolo, Ebenanaowei of Ekpetiama Clan, Bayelsa State, representative of King Spiff, Amayanabo of Twon Brass and Chairman Council of Traditional Rulers, Bayelsa State, welcomed the interventions and pledged to provide support to the UNODC and its project, and other relevant interventions in the Niger Delta.

Overall, the participants of the meeting emphasized on the need to leverage the power of local communities in influencing the trajectories of young people and help them make choices that will give them their best lives.