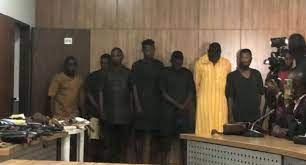 The Department of State Services has filed a remand application against four of the 12 detained associates of embattled Yoruba Nation agitator, Sunday Igboho.

The new application no FHC/ABJ/CS/647/2021 was filed at the Federal High Court in Abuja.

However, the lawyer to the detainees, Pelumi Olajengbesi has described the application as laughable.

“We have seen the new application filed by the DSS to continue the incarceration of innocent people that have been in their custody for over a month. It is laughable and turned logic upside down that after over a month in the DSS custody, the DSS still needs more days to punish them. I can assure you this will fail, ”Olajengbesi.

Justice Egwuatu, last Wednesday, had admitted the 12 applicants to bail after spending five weeks in the custody of the DSS.

The DSS lawyer had told the court that he was not opposing the bail of eight of the applicants as their investigations revealed that the levels of their involvement in the offense of arms stockpiling and other criminal activities were minimal.

But the DSS lawyer had argued that four others, Babatunde, Shittu, Oyetunji, and Sunday, should not be granted bail in the interest of justice and national security.

Olajengbesi had, however, prayed the court to discountenance the argument of the DSS as it was unknown to the Nigerian law.

However, the bail perfection of the 12 detainees suffered a setback last Friday when their lawyer, Olajengbesi, said he got to the bail office of the court and learned that the court required 24 sureties.

The Lawyer stated that he was in contrast to four sureties earlier demanded by the court.