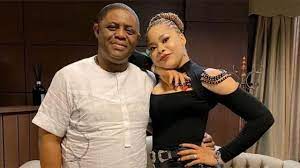 The ex-wife of Femi Fani-Kayode, former Minister of Aviation, Precious Chikwendu, has been detained by police, a friend has revealed.

A Facebook post on Wednesday night by Child Rights activist, Harrison Gwamnishu, claimed that Precious was held after going to the Force CID Area 10, Abuja, on police invitation.

Gwamnishu also claimed that Fani-Kayode instituted a criminal defamation against the mother of his children.