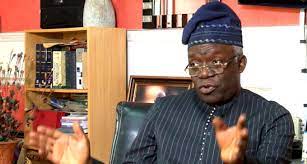 Falana, a Senior Advocate of Nigeria (SAN), also stated that Igboho cannot be deported to Nigeria.

In a statement made available to journalists on Thursday, Falana stated that the request by Nigeria to extradite Igboho must be supported by a statement of offences.

He said, “Contrary to speculations in the media, it is submitted that Igboho cannot be expelled from Benin and deported to Nigeria on the basis of his arrest by Interpol without due process as prescribed by Article 12(4) of the African Charter on Human and Peoples Rights which provides that ‘A non-national legally admitted in a territory of a State Party to the present Charter, may only be expelled from it by virtue of a decision taken in accordance with the law.

“Thus, the Federal Government cannot bring back Igboho to the country without first making a request for his extradition and prosecution in Nigeria pursuant to the provisions of the ECOWAS Convention A/P.1/8/94 on Extradition, which is applicable in the 15 member states of the ECOWAS.

“Accordingly, upon the receipt of a request for the extradition of Igboho, the Government of Benin Republic will be under a legal obligation to commence extradition proceedings in one of its domestic courts. It is pertinent to point out that by virtue of Article 28 (2) of the ECOWAS Convention on Extradition, the procedure with regard to extradition and provisional arrest are governed solely by the law of the requested State, i.e. Benin Republic.

“Apart from providing for a speedy extradition procedure, the government of Benin Republic shall ensure that Igboho, whose extradition is requested, has the right to be heard by a judicial authority and to be assisted by the lawyer of his own choice.

“Nigeria is specifically requested by Article 4 of the ECOWAS Convention on Extradition to convince the Court in Cotonou that the offence in respect of which Igboho is wanted is not political or for the purpose of prosecuting him on account of his ethnic group or political opinion. Various provisions of the African Charter on Human and Peoples’ Rights and the International Covenant on Civil and Political Rights, to which Nigeria is also a party, apply as well. As noted, if the person is lawfully within the territory of the rendering State, extradition requires due process.”

For some months now, Idealposts recalls that Igboho had been leading calls for the sovereignty of South-West Nigeria.

Although, he started with calls for murderous Fulanis to leave Nigeria’s South-West region, his campaign transmogrified into secessionist movement.

The government waded in, which meant the Department of State Services, DSS stormed his house in Ibadan in the midnight some three weeks ago. The nation’s secret police tried to arrest Igboho, and in the process, killed two persons.

Igboho fled and went into hiding. But while trying to escape via Benin Republic to Germany on Monday night, he was seized by law enforcement agents at the airport.

Igboho was in court today (Thursday) but his hearing was adjourned till Friday.