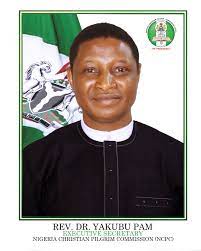 The Executive Secretary of the Nigeria Christian Pilgrim Commission, NCPC, Rev. Yakubu Pam has reiterated that COVID-19 pandemic and paucity of funds to execute capital projects have been the major challenges of the commission.

Rev. Pam stated this on Wednesday while marking his one year in office at the Corporate Headquarters of the NCPC in Abuja.

Speaking to journalists during an interview session at the event, the NCPC boss hinted that there were numbers of capital projects on ground needed to be executed before he took over the mantle of leadership a year ago, saying that all efforts put in place to do the needful proved abortive for lack of funds and effect of COVID-19.

He said, “I met on ground some capital projects that are at zero level, but by the special grace of God, we have taken them very far. If money was on ground, we would be able to finish the projects within one year.

“As you can see, we are supposed to have three to four operations this time around going to Israel, but it couldn’t work. We are still struggling with one, but the success story is that, even in the midst of this, we are now going, which makes us happy”

“We will do our best, counting the time and appreciating Mr. President, who has released some money to us to go ahead.”

In the area of peace, the Executive Secretary expressed delight that President Muhammadu Buhari added another responsibility to his major role.

He revealed that since he resumed office as the Executive Secretary of NCPC, he had done various interventions from one state to other and lots of progresses have been achieved.

“We have done interventions in various states and beyond states; we have gone to regions of this country. We stated from southern Kaduna, some of you knew this and we have gone to Taraba and Benue states and our joy is that we lay foundations in those places we went and so many people are building on those foundations which gladden our heart.

“We also went down to Lagos, we were instruments in the hand of God to make sure we quench down the destruction that was done as a result of EndSars crisis, bringing all the Nigerian youths under their council here and intervene. They did obey and respect my office, then today we have peace in southern Nigeria, Lagos to be specific and other parts of Nigeria and we are very happy.

“We can count so many interventions that we have gone in and so many that are awaiting. It is part of the dreams that are ahead of us.

“Let me say this: an enduring society depicts signs of enduring peace and tolerance, let’s sustain it. Let’s uphold it. I need it. We all need it” Rev. Pam said.

He also discouraged intending pilgrims to remove the thought of abscondment from their mind before embarking on the journey, adding that whoever was caught will definitely face the wrath of the law.

“One of the things we don’t want is abscondment, but by the special grace of God, following the strategies that we have laid down, we have done our best by checking the pilgrims and also checking their locations, using our local screening to interact with people around their localities” he said.

Now that the preparation to embark on pilgrimage to Jordan is on top gear, Rev. Pam also urged the intending pilgrims to shun any form of behaviour that will tarnish the image of Nigeria at the Holy land.

NCPC boss appreciated the role of the media, acknowledging that the roles they have played so far and are still playing will help him deliver his mandate.

“I have found in you the pillar of support by relating my activities last year to the outside world; you are very special to my heart.” Rev. Pam stated.