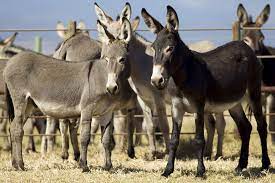 Second reading of a bill which seeks for an Act to regulate the slaughter of donkeys and establish the breeding and ranching of donkeys through the export certification value chain to mitigate the extinction of donkeys and for other related matters, sponsored by the Senate Leader, Yahaya Abdullahi (APC Kebbi North), yesterday generated controversy in the upper legislative chamber.

There were heated arguments among senators on the legality or otherwise of the Senate’s power to legislate on animals, animal husbandry and livestock.

Arguments against the bill started immediately the Senate President, Dr. Ahmad Lawan, called on the sponsor to present his lead debate on the piece of legislation.

Abaribe, who cited relevant sections of the 1999 Constitution to kick against the bill, argued that animals, animal husbandry and livestock are not part of the 68 items on the exclusive list which can be legislated upon by the Senate.

He said further action on the bill will invariably make the Senate going against the laws of the land by dabbling into issues that on the residual list of the Constitution meant for legislative actions of State Houses of Assembly and local government councils.

He said: “Section 4(4a) of the constitution says the National Assembly shall legislate on: any matter in the Concurrent Legislative List set out in the first column of Part II of the Second Schedule to this Constitution to the extent prescribed in the second column opposite thereto

17. The National Assembly may make laws for the Federation or any part thereof with respect to (a) the health, safety and welfare of persons employed to work in factories, offices or other premises or in inter-state transportation and commerce including the training, supervision and qualification of such persons; (b) the regulation of ownership and control of business enterprises throughout the Federation for the purpose of promoting, encouraging or facilitating such ownership and control by citizens of Nigeria.

“(c) The establishment of research centres for agricultural studies; and

(d), the establishment of institutions and bodies for the promotion or financing of industrial, commercial or agricultural projects.

“Section 18 of the Constitution states subject to the provisions of this Constitution, a House of Assembly may make laws for that state with respect to industrial, commercial or agricultural development of the State.

“We are to make laws exclusively based on what is determined in the constitution, livestock and matters of that nature are not expressly provided for in the list. I so submit.”

But in a counter argument, Senator  Aliyu Sabi Abdullahi (APC Niger North), said since the constitution empowers the federal government to carry out research on agriculture generally, the Senate can legislate on the matter contained in the bill particularly in preventing extinction of donkeys.

“In the same constitution, the federal government is given the right to research. This is a research work. And this bill is based on that…when you don’t want something to go into extinction.

“We are talking about conservation management. Some people have suddenly realised the value of the skin of donkeys and the population of donkeys in the North. The point is, we have done a study in Gombe State where we have people coming from Akwa Ibom to buy them. And we have seen that there is a value chain,” he said.

Arguments of Senator Abdullahi were however faulted by Senator Ajibola Basiru (APC Osun Central), who said the constitutional point of order raised against the bill by the Minority Leader was in order.

He said: “For record proposes, the fact that a matter is deemed necessary, does not automatically confer on the federal legislative act and legislative competence.

“Section 1(3) is clear. That any law contrary to the provision of the constitution is to the extent of that urgency null and void. The basis of our existence and power is the constitution.

“I align with the Minority Leader that we should not legislate on the subject matter presented to us by the bill in line with provisions of the 1999 Constitution,” he stressed.

The bill, however, scaled second reading with the Senate President’s intervention who ruled Abaribe out of order.

“It is not for commercial purposes, but to prevent extinction. I feel that we can legislate on it.

“Economically, it is needed not in terms of selling it but in terms of keeping the environment balanced. I rule that we can go ahead and consider the bill,” Lawan explained.