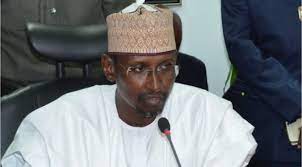 Machinery is being put in place to strengthen collaboration between the Federal Capital Territory Administration, FCTA and the National Open University of Nigeria, NOUN, especially in the areas of manpower development and research.

The FCT Minister, Malam Muhammad Musa Bello who disclosed this when he received a delegation of the University, led by its Vice Chancellor, Professor Olufemi Peters, on a courtesy visit to the FCTA, said such collaboration will close the gaps in capacity development of the FCTA which has a workforce of over 27,000.

In the words of the Minister, “We pride ourselves as an institution that strives to train and retrain its staff over the period of time. In the past, that was done through a combination of public sector institutions as well private sector institutions. But because we have such a large bureaucracy of over 27,000 workers, there is a lot we can do together”.

The Minister added “We will look at what is available and then we factor you in our annual training plans and then we see what is possible.  Some of the training will be targeted to our specific needs in terms of our locality and also our peculiar situation as a Ministry that is meant to develop an ongoing city under construction”.

Other areas the University could collaborate with the FCTA, the Minister said, were in  interventions on converting waste to wealth as well as research into the root cause of  traffic gridlocks in some areas of the FCT with the view of proffering solutions for a more environment friendly and livable city.

Malam Bello urged the University to interact closely with the various departments of the FCTA and discover for themselves more areas of possible collaboration with the Administration, saying, “we will encourage your faculty to create time to interact more closely with our various departments, get to know what is available, move round the city, see problems and then proffer solutions. Just ask for permission so that we can give you access and also background information and data”.

Earlier, the Vice Chancellor of NOUN had itemized areas that the University could partner with the FCTA to include capacity building for primary and secondary school teachers in ICT, Civil servants for service delivery and entrepreneurship education for the youths. Other areas of possible collaborations are research on environmental pollution and traffic congestion.

He also appealed to the Minister for a partnership between the FCTA and NOUN that would enable students of the University to undertake their teaching Practice, Industrial Training and clinical postings and practicum in FCTA owned facilities.